In a surprising turn of events, BJP leader Kapil Mishra on Thursday, tendered a written, unconditional apology to Delhi Health Minister Satyendra Jain on bribery allegations made against Jain. In  2017, Mishra had alleged that Jain had paid a bribe Rs 2 crores to Chief Minister Arvind Kejriwal on May 5, 2017. After Mishra tendered an apology to AAP leader Satyendar Jain, a Delhi court closed a criminal defamation case against Mishra - discharging the bail bond as Mishra withdrew his complaint.

Speaking at AAP press conference, Jain said. "Kapil Mishra had made false accusations on me in 2017 and said, I gave Rs 2 crore to the Chief Minister.  When it came to proving the charges in court, Kapil Mishra apologized in writing to me and said that the allegations I had made were politically motivated." Mishra was part of Kejriwal's cabinet from 2015 to 2017, before switching to BJP. 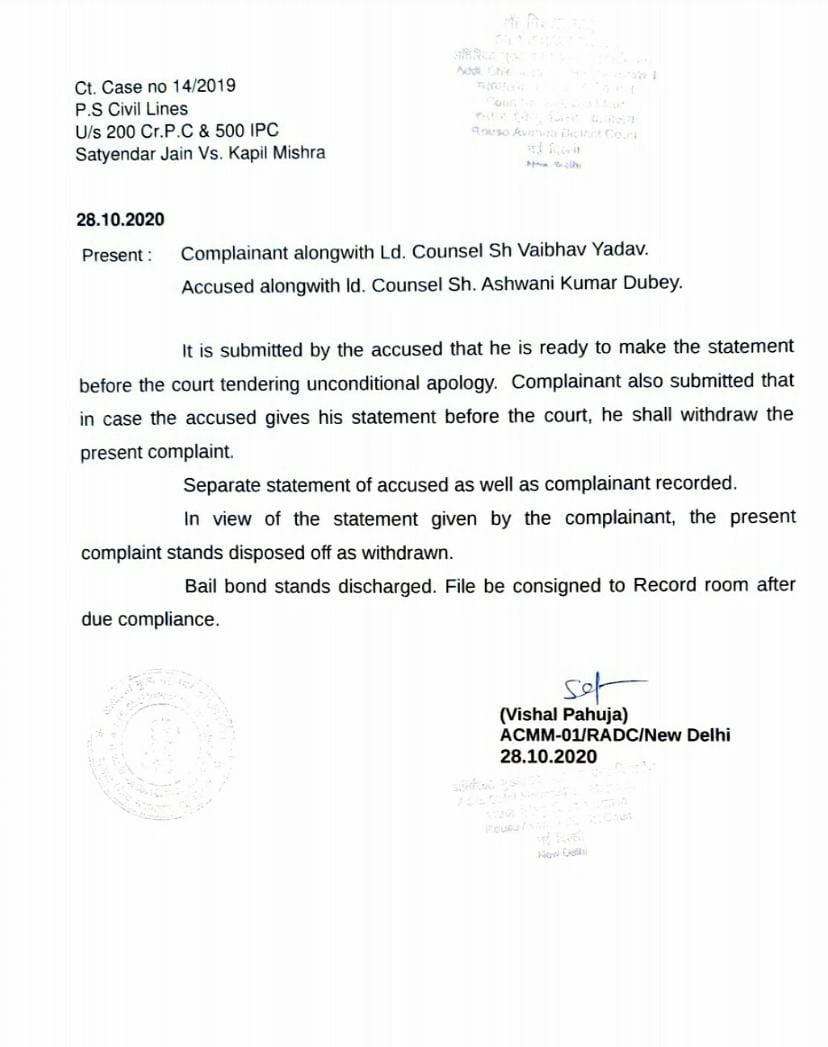 What did Kapil Mishra claim?

On May 5, 2017, then-AAP's Water Resource minster Kapil Mishra levelled graft allegations against Delhi Health Minister Satyendar Jain alleging that Jain had given Rs 2 crores to CM Kejriwal at his residence. In response, Jain filed a criminal defamation case against Mishra on May 7, accusing him of levelling baseless corruptions allegations against him. Mishra was charged under section 500 (punishment for defamation) of the Indian Penal Code in the case, as per reports

As per Jain's revelation of Mishra's statements to court, the AAP-turned-BJP neta said, “Day before yesterday, at Kejriwal’s house, I saw Satender Jain give Kejriwal Rs.2 crores in cash. I asked him ‘What is this?’ He (Kejriwal) refused to answer. And then he said ‘In politics things like this happen that can only be talked about later.”

A day after levelling these allegations, Mishra was sacked from the cabinet and was later disqualified as an MLA, on grounds of defection and anti-party activities in 2019. Mishra's allegations too were never proved as the CBI and Lokayukta gave a clean chit to CM Kejriwal in the alleged bribery case. After he was disqualified as MLA in August 2019, he joined the BJP in the presence of senior leaders like Manoj Tiwari, Vijay Goel, Vijender Gupta, Satish Upadhyay and others. He contested in the 2020 Assembly polls a created a furore over his inflammatory tweets and speeches, but failed to win. He also stirred a controversy after giving an incendiary speech in front of a police officer in North-East Delhi, after which riots were witnessed throughout the area - killing 53.