Karnataka government on Friday, exempted all factories for a period of three months from provisions of weekly stipulated hours and daily hours amid lockdown

In a significant change to the state's labour laws, Karnataka government on Friday, exempted all factories for a period of three months from provisions of weekly stipulated hours and daily hours. The order extended the maximum working hours from eight to ten hours per day and sixty hours per week. Moreover, the government clarified that overtime wages will remain unchanged. 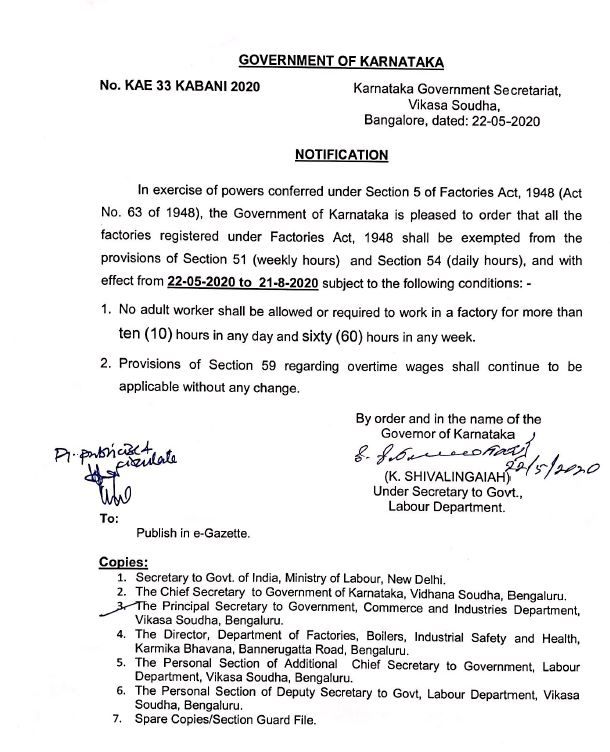 Karnataka not to allow entry of people from four states, says CM Yediyurappa

Karnataka, which has significantly lifted restrictions in lockdown phase 4, has set up a task force to formulate ways to attract foreign investors who are/have withdrawing from China. The state had allowed all industrial activities to resume across the state in all areas except containment zones from May 4. While the government has announced Rs. 1,610 crore relief package for farmers, MSMEs, handloom weavers, flower growers, washermen, barbers, auto, and taxi drivers, the state has also barred the entry of people from Gujarat, Maharashtra, Kerala and Tamil Nadu till May 31 due to their soaring COVID-19 cases.

Several Indian business experts have welcomed the loosening of regulations stating that this move will provide flexibility and urge other states to bring in labour reforms. On the other hand, worker unions have expressed their dissatisfaction, stating that their role will be diminished and want the Centre to intervene. These laws have been sent to the Centre for approval before it comes into force into the respective states.

On May 14, while announcing the Centre's Rs 20 lakh crore economic package, Finance Minister Nirmala Sitharaman, stated that the government will be reforming labour laws in the near future. The current 44 labour laws will be reduced to just 4 labour codes. The bill is currently in the parliamentary standing committee and will soon be introduced in parliament.

PEOPLE HAVE PLEDGED SO FAR
LATEST NEWS
View all
3 hours ago
Mizoram restarts issuance of temporary ILP
7 hours ago
Haryana CM Khattar urges people to use indigenous goods, give up lure for Chinese ones
5 hours ago
Gehlot forms committee to suggest on opening of religious places in Rajasthan
7 hours ago
Bihar: JDU hits back at Chirag Paswan for taking a dig at Nitish Kumar on migrant crisis
3 hours ago
WB govt shares details of damages by Cyclone Amphan with IMCT