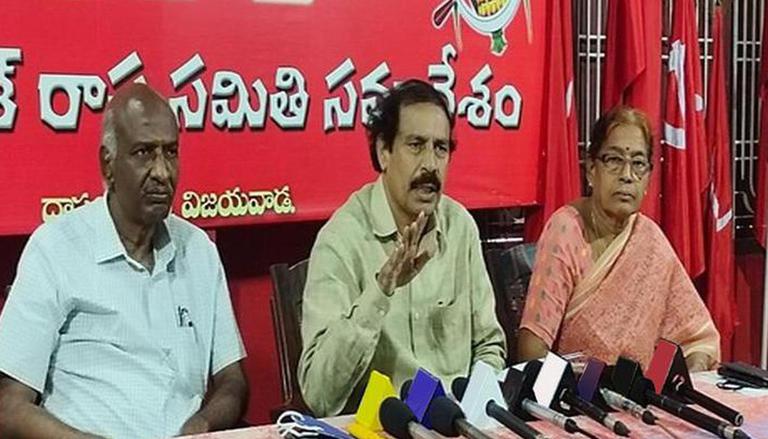 
A meeting of Left parties, Congress, and Telugu Desam Party (TDP) was held on Wednesday at Andhra Pradesh's Communist Party India (CPI) office in an attempt to make Bharat Bandh a success. During the meeting, CPI State Leader Donepudi Sankar said, "Farmers have been agitating for nine months in Delhi, so this Bharat Bandh will be held to support them."

Criticising the Centre for its policies, CPI leader noted, "The three black laws of the central government have thrown farmers into crisis. The central government is selling off railway stations, railway lines, telecom, oil, gas, insurance, banks, airports and seaports in the name of the National Monetisation Pipeline."

In addition, the CPI leader stated that the PM Modi-led central government intended to privatise government agencies. "The Centre is trying to sell off public assets worth Rs 75 lakh crores at throwaway prices. It is trying to privatize Visakhapatnam Steel Plant at a loss," the leader stated. "Prices of petrol, diesel, gas and other essential commodities have also increased," he added. He also urged members of the public, political parties, mass groups, and labour unions to join the Bharat Bandh.

State Secretary of the Communist Party of India K Ramakrishna urged the ruling YSR Congress Party (YSRCP) and the main opposition Telugu Desam Party (TDP) on Sunday to support the ‘Bharat Bandh' called by farmers' organisations on September 27 in protest against the "anti-people’s policies" of the BJP-led Centre.

Ramakrishna, who was leading a ‘Jan Andolan' padayatra by CPI activists and frontal farmers' and labourers' organisations such as AIKS and AITUC from the Kurnool road bypass centre to the Church centre, claimed that the Centre was selling off public sector enterprises (PSEs), including the Visakhapatnam Steel Plant (VSP), which was against ‘national interest.' Ramakrishna claimed that the costs of petrol, diesel and LPG cylinders, which were hovering about 60, 50, and 440 respectively before the BJP gained power, have now risen to 112, 99, and 960, putting an additional strain on the common people.