Maharashtra Governor Bhagat Singh Koshyari, on Thursday, has requested the Election Commission of India to declare elections to 9 vacant seats in state council

In a massive development, Maharashtra Governor Bhagat Singh Koshyari, on Thursday, has requested the Election Commission of India to declare elections to the 9 vacant seats of the Maharashtra Legislative Council ‘at the earliest’. In his letter, he pointed out that Chief Minister Uddhav Thackeray who is not a member of either house of the State Legislature needs to get elected to the Council before 27th May 2020. This development comes a day after Thackeray spoke to PM Modi over the delay in his nomination to the state council. 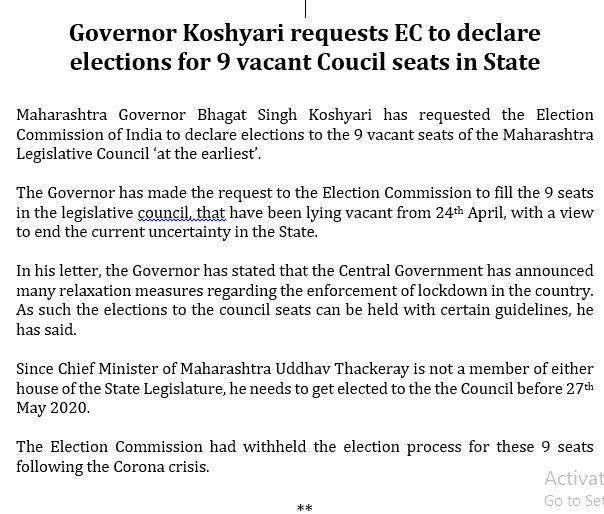 On April 27, the state cabinet sent a reminder to Governor Koshyari on nominating Thackeray to the Maharashtra legislative council as the governor's pick. Koshyari is yet to accept the nomination, as two seats from governor's quota are currently unfilled - after 2 NCP councillors resigned to join BJP. After the cabinet's reminder, two PILs have been filed with the Bombay High Court, urging for holding immediate elections to get Thackeray elected to the Council.

Earlier on April 9, Maharashtra cabinet picked Thackeray to be the governor's nominee to the Maharashtra state council. Koshyari had earlier rejected NCP's two nominees stating that election for the two seats will be held in June and there was no emergency prior to that. But with the postponement of MLC polls due to Coronavirus (COVID-19) spread in the state, Thackeray is yet to be elected to either legislative body.

Uddhav sworn-in as CM, yet to be elected

The Shiv Sena chief Uddhav Thackeray, who is the first member of the Thackeray clan to hold a Chief ministerial position took oath on November 30. While he was not elected to the Assembly, he was unanimously selected as the Maha Vikas Aghadi leader and won the floor test by garnering 169 seats. Thackeray has to be elected to the Council by six months of taking oath as CM- which will end on May 28. If he is not nominated, Thackeray will have to resign as CM.