West Bengal CM Mamata Banerjee on Monday decried the arrest of activist Disha Ravi and alleged that the Centre is protecting the guilty including BJP IT Cell. 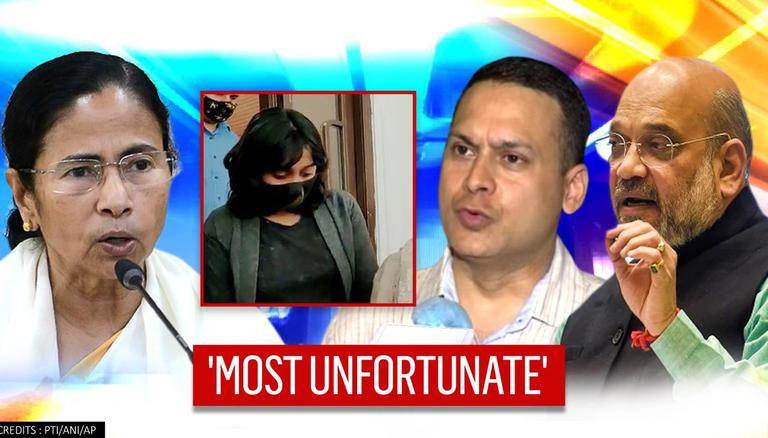 West Bengal CM Mamata Banerjee on Monday decried the arrest of activist Disha Ravi and alleged that the Centre is protecting the guilty including the BJP IT Cell. To buttress her point, she claimed that BJP members were posing as TMC workers while calling teachers and allegedly spreading misinformation about the party ahead of the WB Assembly polls due in April-May this year. Lamenting that the Union government was not sparing a 21-year-old woman, Banerjee alleged that only the people who create nuisance are being protected. Moreover, she lambasted BJP for abusing TMC on social networking sites.

WB CM Mamata Banerjee remarked, "I am really sorry that the actual who are guilty and who are doing mistakes specially the BJP IT Cell. Even today, I got information that they are giving rings to the officers and teachers and saying that we are calling from the Trinamool Congress office. And they are giving some misinformation. And when they crosschecked the number from where they are talking, they have seen the BJP IT member numbers and they are calling from private numbers. And they are abusing the Trinamool Congress in social networks- Twitter and Facebook. So, it is their phenomemon. They cannot spare a 21-year-old girl."

She added, "They can spare only nuisance creating people. That is most unfortunate- the discrimination. Why is BJP misusing the social network like this? Can they phone in the name of Trinamool Congress- my party without my consent? Is the courtesy?"

On February 3, Greta Thunberg stirred a row by posting a toolkit for people to help in the agitation against the farm laws. The 6-page document titled 'Ask India Why' consisted of detailed instructions to target the Indian government and a few Indian corporate enterprises, in the garb of the farmers' protest. After the tweet and its contents were highlighted by Republic Media Network, the environmental activist deleted it and posted an updated version of the document which is a toned-down version of the original one. However, the Delhi Police registered an FIR against the authors of the toolkit under Sections 120, 124A, 153, and 153A of the Indian Penal Code.

In connection with this, 21-year-old activist Disha Ravi was arrested by the Delhi Police on January 13 and was remanded to police custody for 5 days after being produced in front of a magistrate on Sunday. Addressing a press briefing earlier in the day, Delhi Police Cyber Cell Joint CP Prem Nath revealed that the "action plan" outlined in the toolkit was carried out in Delhi on January 26 resulting in 510 police personnel getting injured. Moreover, he alleged that Shantanu, Nikita Jacob and Disha Ravi are the creators of the toolkit.

Claiming that incriminating evidence was also found from Disha's device, he justified the action against the 21-year-old activist citing that Jacob did not cooperate with the police. Additionally, he allayed concerns about the manner of her arrest. According to the senior official, Disha, Shantanu and Nikita Jacob participated in a Zoom meeting organised by pro-Khalistani Poetic Justice Foundation on January 11 to shape the modalities for the action plan on Republic Day. Meanwhile, non-bailable warrants have been issued by the court against Jacob and Shantanu who are absconding at present.

Read: 'So Many Attempts To Whitewash A Sin': BJP's BL Santhosh Slams Those Backing Disha Ravi