AIMIM chief Asaduddin Owaisi, on Tuesday, said that one must encourage to 'separate the judiciary from executive' on ex-CJI Gogoi's RS nomination

Slamming former Chief Justice of India Ranjan Gogoi's reason for accepting the Rajya Sabha nomination, AIMIM chief Asaduddin Owaisi, on Tuesday, said that one must encourage to 'separate the judiciary from executive'. Citing article 50, Owaisi said that the parliament needs separation and not cohesion with the judiciary. Several eminent lawyers, former judges have come out and criticised the former CJI's nomination lamenting at the loss of 'independence of the judiciary'. 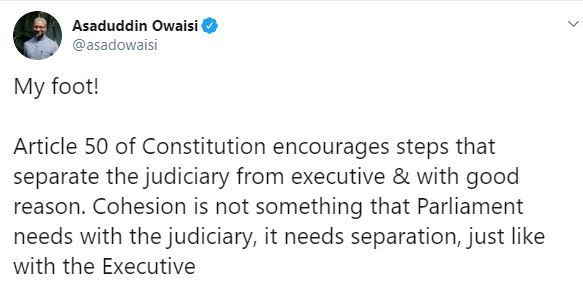 Gogoi: 'Will put views of judiciary to legislative'

Breaking his silence as to why he has accepted the Rajya Sabha nomination, former CJI Ranjan Gogoi, on Tuesday, said that his presence in the parliament will help in putting judiciary's views to it and vice versa, in an interview with a leading Assamese News channel. He also reportedly said that he had given ample time before taking the decision to accept the nomination. Earlier in the day, Gogoi said that he will speak in detail to the media about it after taking oath in Delhi on Wednesday.

"My presence in Parliament will be an opportunity to project the views of the Judiciary before the legislature and vice versa. I have accepted the nomination to the Rajya Sabha because of a strong conviction that the legislature and judiciary must at some point work for nation-building," he said to a leading Assamese News channel. He added that he hopes to be an independent voice in the Parliament.

After the nomination,  Owaisi had asked if it was 'Quid pro quo?', echoing his 'Supreme, Not Infallible' comment on the Supreme Court's judgment on the Ayodhya dispute. He also questioned how the independence of the judiciary will remain after the inclusion of a former judge into the legislative body. On Monday evening, President Ramnath Kovind nominated former CJI Gogoi as a Rajya Sabha MP under clause (1) of Article 80 of the Constitution to fill the vacancy in Rajya Sabha due to the retirement of one of the nominated members.

'Politician or judge all along?' asks TMC MP over ex-CJI Ranjan Gogoi's nomination to RS