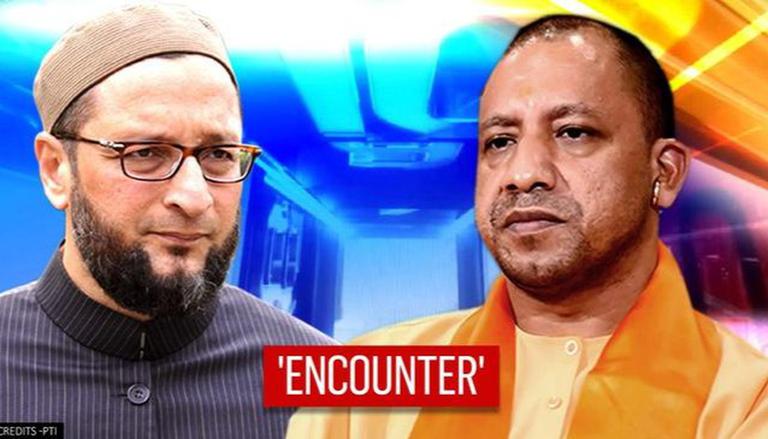 Slamming Uttar Pradesh CM Yogi Adityanath for seeking to withdraw cases against three BJP MLAs accused in the Muzzafarnagar riots, AIMIM chief Asaduddin Owaisi said that it is "encounter" of law and order. The AIMIM has also said on Friday that it is only Majlis that can challenge the power of Prime Minister Modi. Owaisi has pointed out that UP CM Yogi had earlier withdrawn cases against himself and now is doing the same for his colleagues.

In a twist to Uttar Pradesh politics, Pragathisheel Samajwadi Party (PSP) chief Shivpal Singh met with Suheldev Bharatiya Samaj Party (SBSP) chief Om Prakash Rajbhar in Lucknow on Thursday. The hour-long meeting was regarding Yadav partnering in the third-party coalition against the BJP. Rajbhar has already allied with AIMIM, while Shivpal Yadav was eyeing to ally with estranged nephew Akhilesh Yadav. AIMIM chief Owaisi had met Suheldev Bharatiya Samaj Party's Om Prakash Rajbhar in Lucknow to stitch an alliance for the 2022 UP polls.

"The two of us (Suheldev Bharatiya Samaj Party's Om Prakash Rajbhar and he) are sitting before you. We stand together and we'll work under his leadership," Owaisi said. Apart from AIMIM, AAP and JDU have announced that they will be contesting for the UP polls. The incumbent BJP now faces Congress, Samajwadi Party, BSP, AAP, JDU, AIMIM-SBSP-, Chandrashekhar Azad's Azad Samaj Party in 2022 polls.

Meanwhile, emboldened by the victory in Bihar assembly eletcions, AIMIM is all set to enter the West Bengal polls. But WB CM Mamata is irked and had said that they will contest the polls to divide minority votes at the behest of BJP, claiming that the saffron party pays AIMIM. On this, Owaisi pointed out that Mamata's TMC was part of the NDA under Atal Bihari Vajpayee and that was when the Gujarat riots took place. "If she is saying our party is getting money to divide minority votes, then I would like to tell her that nobody can buy Asaduddin Owaisi by offering money. Her allegations are baseless and she has become a victim of restlessness. She should care about her own party. So many of TMC members are joining BJP, she should be worrying about it," he said.

"I would also like to tell Mamata Banerjee that the way she fought BJP in 2019 Lok Sabha elections, they still ended up getting around 17 seats there. Our party was not even present there. And the second thing is that she has insulted the voters of Bihar. She is trying to divert all her anger on Owaisi but she has not yet encountered a real Muslim," the AIMIM chief said.

READ | PM Modi Extends Olive Branch To Protesting Farmers; Urges 'talks Should Be Based On Facts'