Ahead of Shiv Sena chief Uddhav Thackeray's visit to Ayodhya on March 7, Shiv Sena leader Pratap Sarnaik on Friday has written to PM Narendra Modi asking for the inclusion of a Shiv Sena member in the 15-member Ram Janmabhoomi Teerth Kshetra Trust. Reminding PM Modi of the contribution of thousands of Shiv Sainiks in the Ram Janmabhoomi movement, he added that Shiv Sena Supremo Balaasaheb Thackeray had taken the responsibility of the destruction of Babri Masjid. A delegation of Shiv Sena leaders led by Sanjay Raut has already reached Ayodhya to make arrangements for Thackeray's visit. 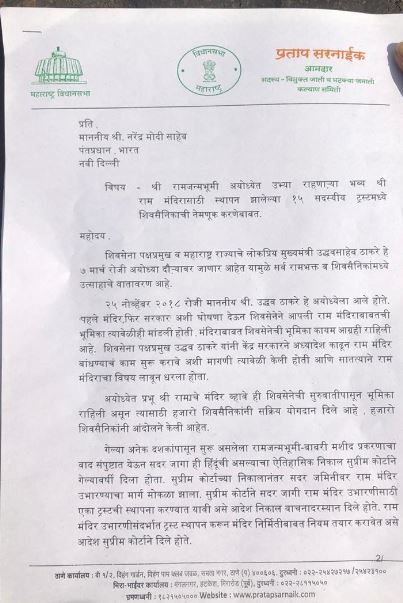 Earlier on January 22, Raut had announced that Uddhav Thackeray will visit Ayodhya after completing 100 days of governance. Detailing his itinerary, Raut said that Thackeray along with countless Shiv Sainiks will visit Ram Lalla in the afternoon and will perform aarti on Sarayu riverbanks in the afternoon. He has also invited everyone to be a part of this historic journey, which will include senior Shiv Sena ministers, the Thackeray family and senior leaders like Raut himself. Thackeray, his son Aaditya Thackeray, along with 18 party MPs visited Ayodhya in June 2019 and offered prayers at the makeshift Ram Lalla temple.

Previously through its mouthpiece Saamana, Sena had acknowledged that the Vishwa Hindu Parishad spearheaded the Ram Janmabhoomi movement, but had reminded that several Hindutva outfits like Shiv Sena, Bajarang Dal were involved in it. Touting its role in the demolition of the Babri masjid in 1992, Saamana claimed that seeing the blood of karsevaks flow in the Sarayu had angered Shiv Sainiks, but had never taken political benefits of its role in the Babri demolition. Sena has alleged that the various members of the trust, Shiv Sena alleged that all the chosen members including Mahant Nritya Gopal Das, Champat Rai and Nripendra Misra were all close to PM Modi or some RSS-affiliated organisation - which will benefit BJP in the 2024 Lok Sabha polls.