After being elected as the BJP legislative party chief in MP, soon-to-be-elected CM Shivraj Singh Chouhan, said that his only goal was to stop Coronavirus

After being elected as the BJP legislative party chief in Madhya Pradesh, soon-to-be-elected CM Shivraj Singh Chouhan, on Monday, said that his only goal was to stop coronavirus. Denying any ceremony to be held for his formal oath-taking, Chouhan urged BJP supporters not to take to the streets and celebrate. Earlier in the day, he was elected as the BJP legislative chief in the meeting where all BJP MLAs were seen celebrating, garlanding Chouhan, hugging him, feeding sweets and raising joined hands - displaying their party strength.

"The only goal is to stop coronavirus and protect people. I will do this job after taking oath. I urge people not to celebrate and come down on the streets," he said to ANI.

Here are visuals from the BJP MLA meet: 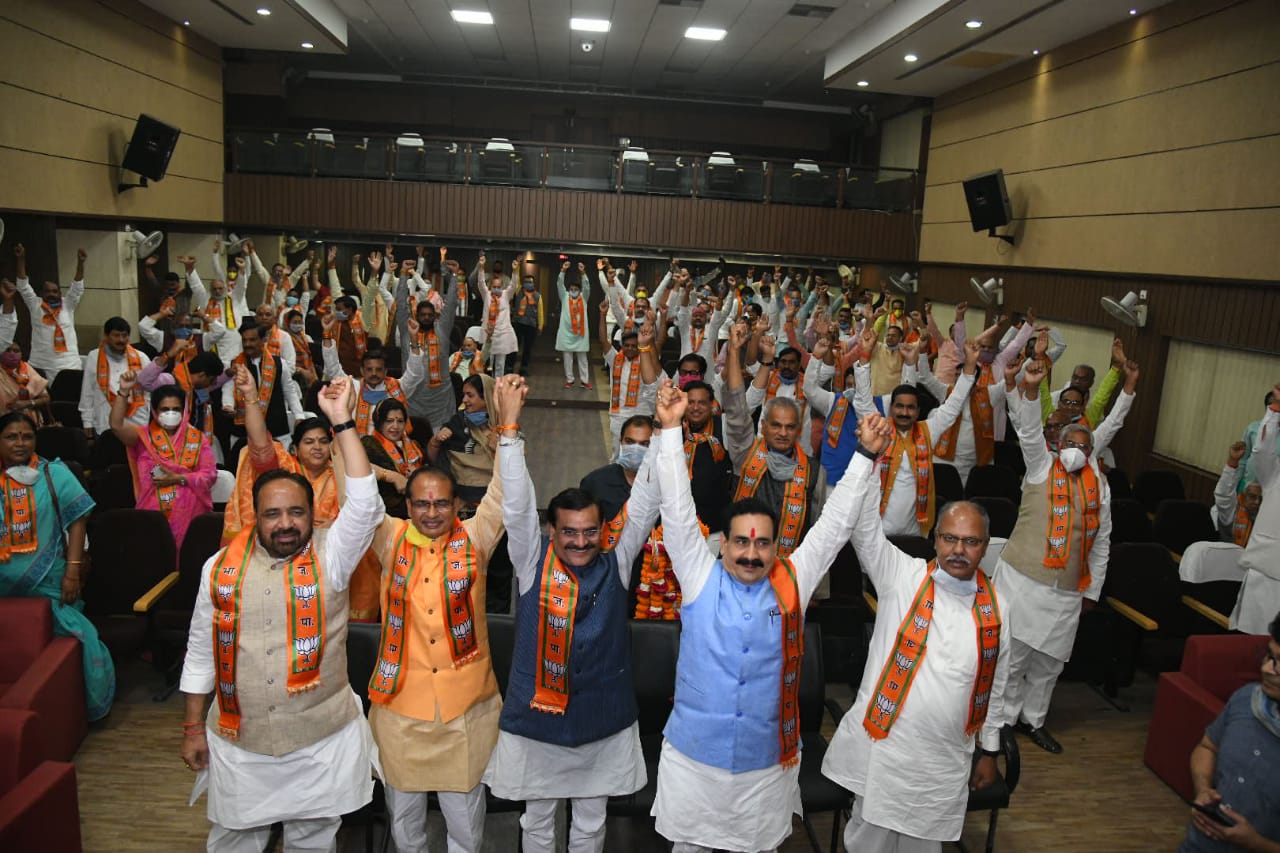 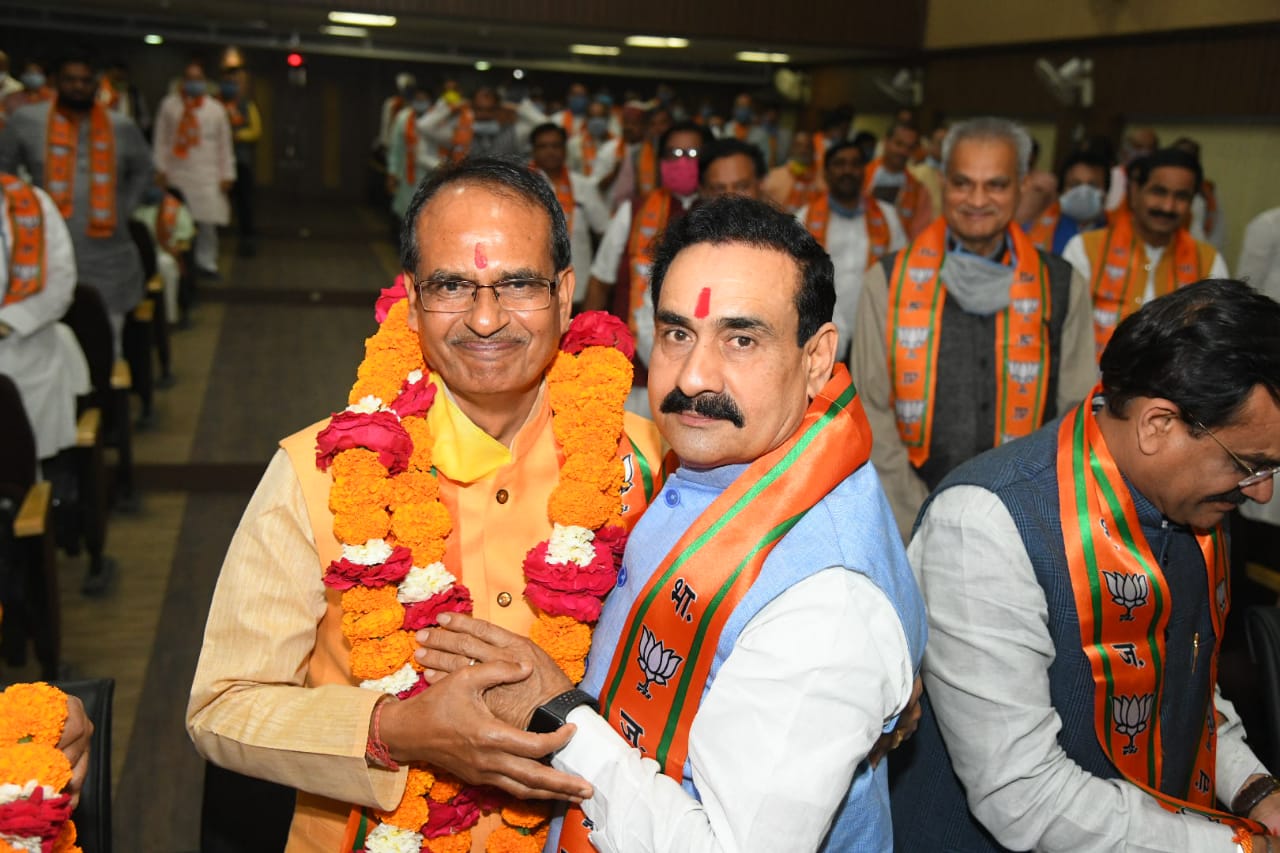 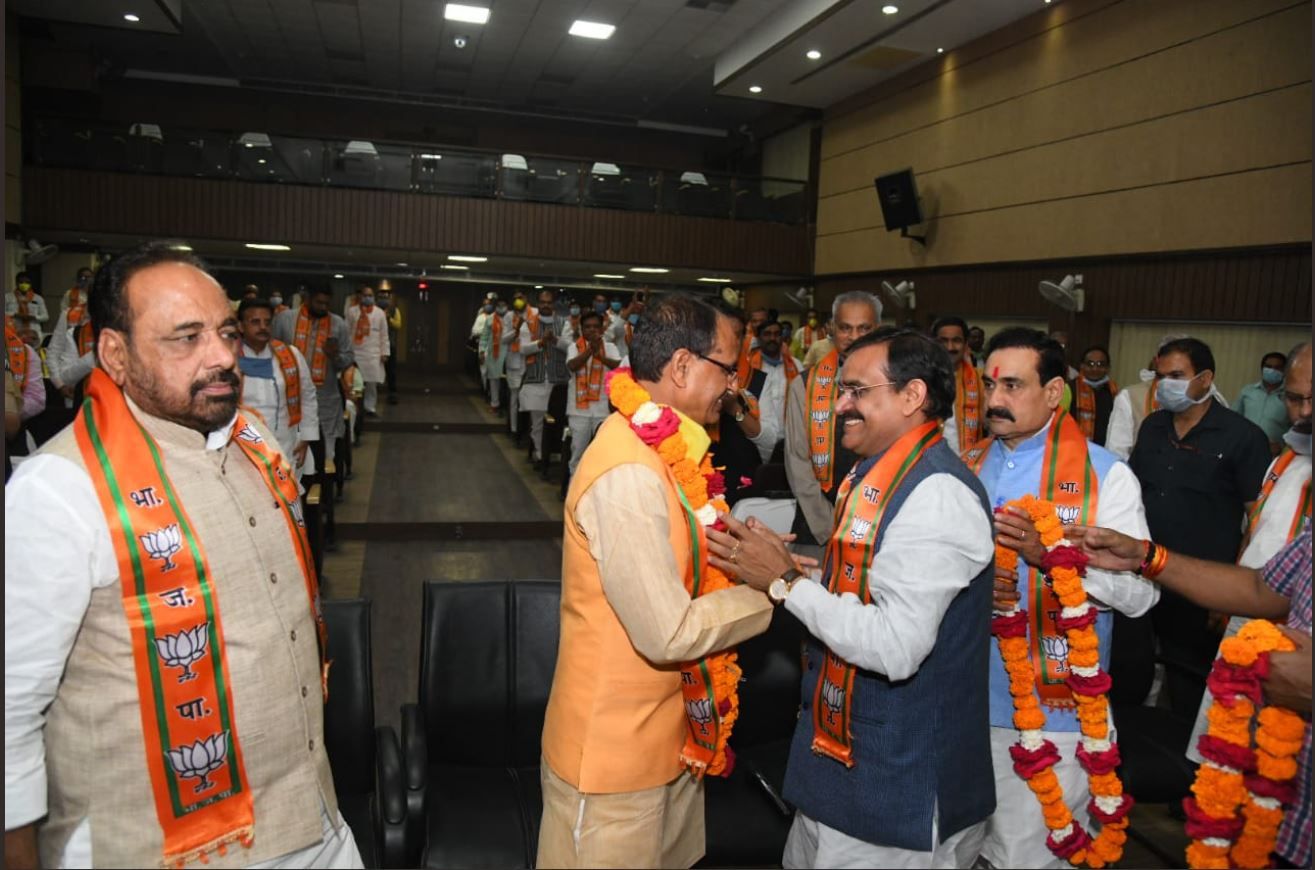 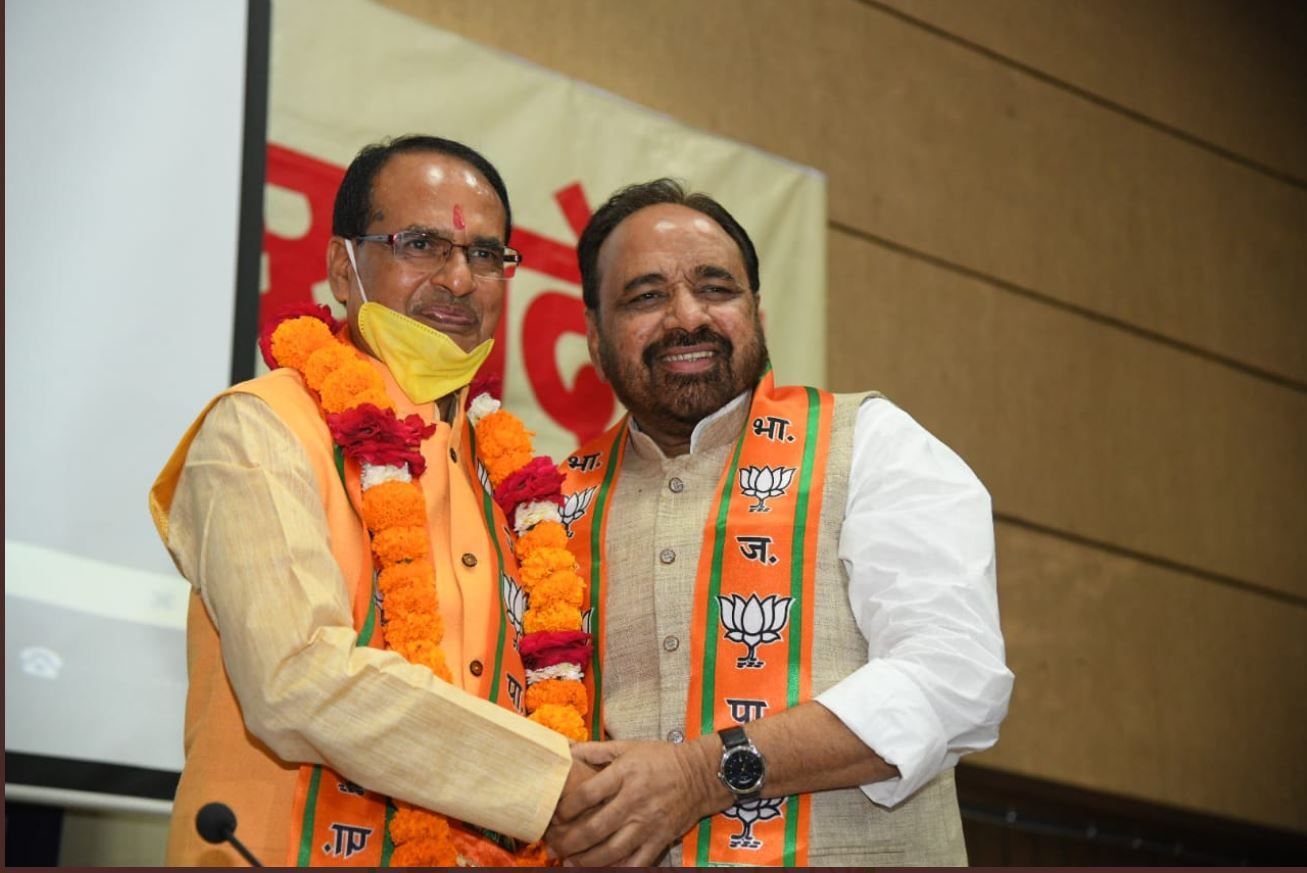 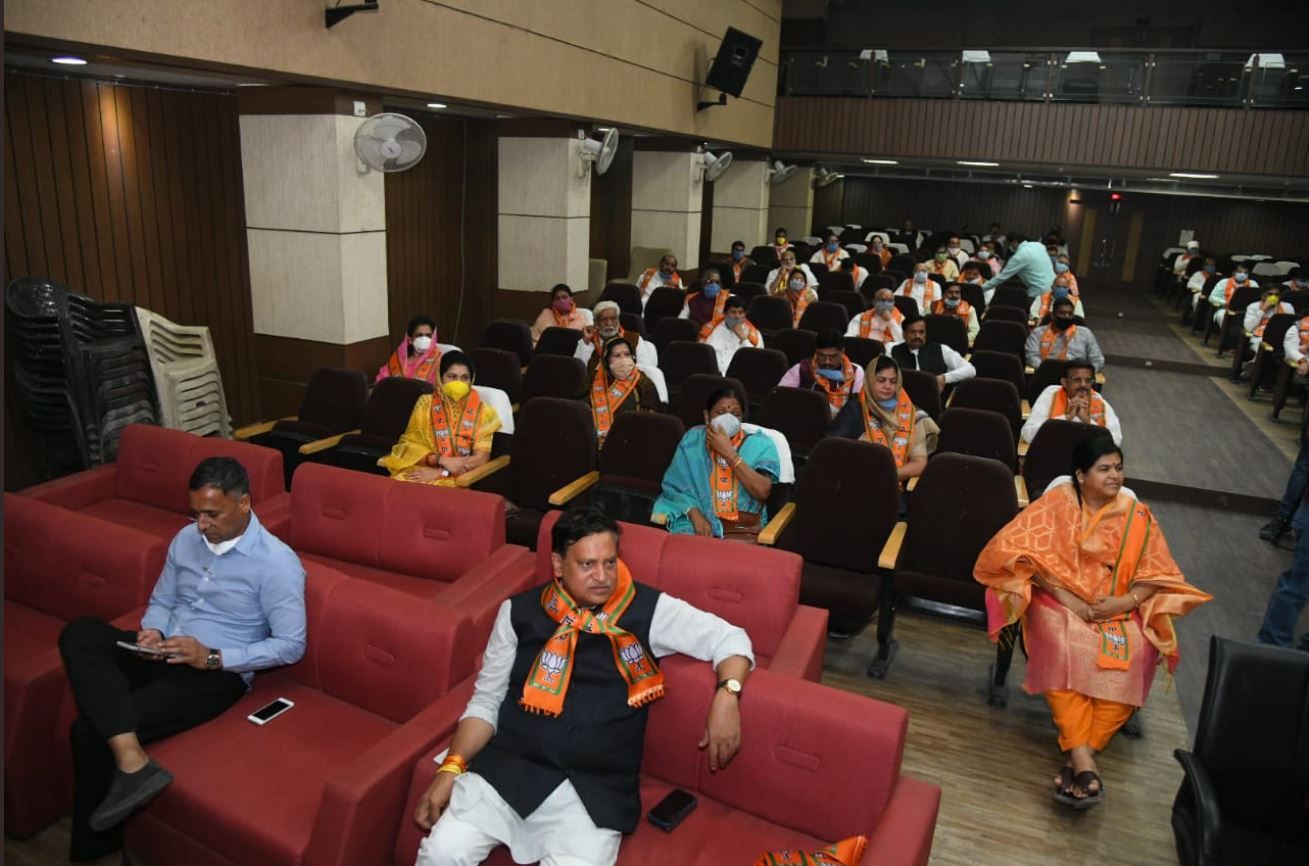 (These are very emotional moments for me. I am an ordinary worker of the country. I have been working for many years and it is in this party as that as an ordinary worker without any political and family background is given the opportunity to do a great job)

On March 21, a day after Kamal Nath's resignation, all the 22 rebel Congress MLAs whose resignation was accepted by the Madhya Pradesh Speaker joined BJP in the presence of party president JP Nadda and Jyotiraditya Scindia. They arrived in the national capital from Bengaluru, where they were holed up for the last few days. Kamal Nath - during his resignation speech - had alleged BJP’s involvement in the 22 MLAs deserting the Congress camp which ultimately reduced the government to a minority.

The crisis in the Kamal Nath government started when Congress alleged BJP of poaching 4 MLAs - two of which returned to Kamal Nath's folds. Soon, 22 MLAs including 6 cabinet ministers - loyal to Jyotiraditya Scindia flew to Bengaluru and submitted their resignations. While Congress expelled the six cabinet ministers and the Speaker accepted their resignations, the biggest jolt occurred when former Guna MP Jyotiraditya Scindia formally submitted his resignation to Congress interim chief Sonia Gandhi and then joined the BJP.

While the BJP had been demanding a floor test, the Congress adjourned the Assembly till March 26 amid Coronavirus. After both parties approached the Supreme Court, the observed that the MP Assembly session should be reconvened on Friday for the sole purpose of holding a floor test by show of hands, while hearing a plea of BJP leaders seeking an immediate floor test. This was immediately followed by the Speaker accepting the remaining 16 MLAs' resignation, officially reducing Congress to a minority government.