West Bengal CM Mamata Banerjee has announced that the birth anniversary of Netaji Subash Chandra Bose on January 23, will be celebrated as 'Desh Nayak Diwas' 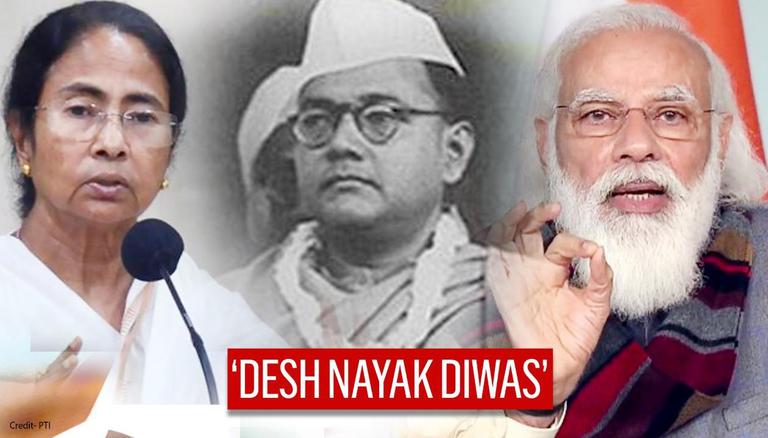 In yet another attempt to oppose the BJP-led Central government, West Bengal chief minister Mamata Banerjee has announced that the birth anniversary of Netaji Subas Chandra Bose on January 23, will be celebrated as 'Desh Nayak Diwas' annually. This comes hours after the Centre declared that it has decided to observe Netaji's birth anniversary as 'Parakram Diwas'. The Bengal chief minister had earlier written a letter to PM Modi demanding declaration of January 23 as a national holiday to honour Netaji.

Earlier in the day, TMC MP Saugata Roy had expressed displeasure at the Union Government's decision to celebrate Netaji's birthday as 'Parakram Diwas'. "We believe Netaji deserves much better. We will observe this day on our own with Mamata Banerjee leading a procession in the state," the TMC MP had told ANI.

This is cheap politics: BJP

Meanwhile, reacting to the announcement by TMC, BJP MP Arun Singh has labelled the decision to celebrate 'Desh Nayak Diwas' as 'cheap politics' in view of the upcoming state assembly elections. The BJP MP came down heavily on CM Banerjee and questioned why she had not done anything to honour Netaji in the last 9 years that TMC has been in power.

"Till date, Mamata Banerjee has disrespected everyone. Now when PM Modi has formed a committee for Netaji and done much more, Mamata Banerjee has realized that she also needs to do something with the elections on head. This is cheap politics. If she was so serious about Netaji's cause, she has been in power for more than 9 years, why hasn't she done anything. Now because of elections, she is panicking and attempting such tricks," Singh told Republic TV on Tuesday evening.

Earlier in January, PM Modi had announced that Centre has constituted a committee to decide on the activities for a year-long commemoration of Netaji's 125th Birth Anniversary starting 23 January 2021. The committee, which was to be headed by Home Minister Amit Shah comprising of experts, historians, authors, family members of Netaji and INA associates, was to decide how to pay tribute to Netaji's contribution to India’s freedom struggle.

Prime Minister Narendra Modi is likely to visit poll-bound West Bengal's capital Kolkata to attend the celebration of Netaji Subash Chandra Bose's 125th birth anniversary on January 23 at Victoria Memorial and National Library Programme, say sources. The Government of India has also announced that it has decided to observe Netaji Subash Chandra Bose's birth anniversary every year as Parakram Diwas. The Centre announced its move to pay tribute to the freedom fighter to inspire the youth of the nation to 'act with fortitude in the face of adversity'. Ahead of Netaji's 125th birth anniversary this Saturday, The Ministry of Culture issued a circular on Tuesday announcing January 23 to be observed as Parakram Diwas every year from now on.