Recently, one of the best Korean restaurants in LA, Jun Won announced that they were shutting down. This announcement was made on Jun Won’s official Instagram.

In the caption, the owner also expressed gratitude towards those who extended support to them. As per reports, this restaurant has been in operation since the past 26 years. The post shared by the Korean restaurant appears to feature an image of the restaurant billboard.

Jun Won captioned the post as, “We are sad to announce that after 26 years of service we will be closing our doors at the end of this month due to the harsh economic situation. We had such an amazing run thanks to our loyal customers that have been dining with us since 1994. We wanted to extend our appreciation and gratitude for everyone that has supported us throughout these years and hope that our paths will cross in the future. Thank you”.

ALSO READ: Chickpea Flour Or Besan Is Known By Many Names In India, Take A Look 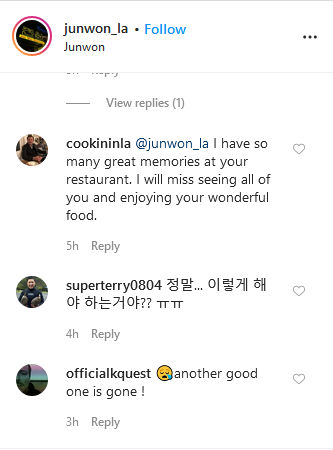 ALSO READ: If You Knew 'Nihari' Was Desi Before Adnan Sami's Tweet, Take This Food Quiz & Prove It

Jun Won was established in the year 1994. This restaurant was famous for dishes like the braised black cod and the seafood scallion pancake coupled with a seasonal banchan. You can check out Jun Won’s menu here.

The owner of Jun Won, Jeff Jun told a media portal that his money was ‘bleeding’. Stating the cause for shutting down, Jun said that they were not making enough money and did not expect the situation to change in the near future. Hence, they decided to shut down the restaurant.