Following her altercation at the LA Lakers vs Hawks game, the now infamous LeBron James heckler Juliana Carlos and her husband were trolled on social media.

The highlight for this week's Los Angeles Lakers vs Atlanta Hawks game turned out to be LeBron James going back and forth with a Hawks fan. The incident had the officials pause the game, following which the heckler – Juliana Carlos – was asked to leave the venue. She went on to make videos explaining her side, which had fans commenting on her Instagram posts to troll her and her husband Chris Carlos.

The referees stopped the game after LeBron was heckled by a spectator in Atlanta. pic.twitter.com/apoDqvt4ll

Also read | LeBron James heckler Juliana Carlos reveals her side of the story on Instagram: WATCH 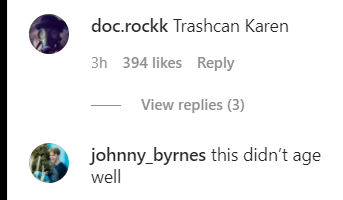 "LMFAOOO U WAS DEFENDING HIM???! BRON WILL KNOCK U OUT BOTH," one fan wrote under a post, shocked that she would threaten James for apparently abusing her husband. Many users, however, went on to call her a gold digger, candidly calling her out for marrying for money. Some even spoke on her appearance, with their comments not limited to one post.

LeBron James has fans kicked out for heckling, a breakdown pic.twitter.com/rGlKpuQWJs

"He def old enough to be your father," one user wrote, while many agreed with them. Some people checked out her account after the game, expressing their shock at finding out how old her husband is. "I wasn’t expecting your Husband to Be 60 tf he a grown ass man he can take up for himself," wrote another user, believing that she should not have jumped into their argument.

She was also trolled on Twitter, where many believed a 25-year-old should not be engaging in such arguments. Some users even had a problem with her language. In the series of videos she uploaded on Instagram, Carlos calls out James, stating that the NBA star called out her husband first. She added that she would always defend her husband, who was apparently also engaging in a back and forth with James.

When asked about the same in an interview after the game, James admitted to having missed interactions like these. He claimed to need this as a player, even explaining that she need not have been thrown out. However, the four-time NBA champion believes that he and Chris Carlos were having their own conversation when she jumped in.

While Juliana Carlos was trolled heavily, some fans also called out her husband Chris. The couple have been seen in previous Hawks games before, even posting about in on Instagram. Chris Carlos apparently runs his family business – a distributing company – in Atlanta.

Anthony Davis scored team-high 25 points for the team, while James finished with 21 points. The Lakers dominated most of the game, scoring 16 while conceding no points at all in the third quarter. While the Hawks attempted to a make a comeback after a three-pointer from Trae Young, James scored his own three-pointer soon after.

Trae Young had 25 points and 16 assists for the Hawks.

WE RECOMMEND
LeBron James heckler Juliana Carlos reveals her side of the story on Instagram: WATCH