In a recent Instagram story, Vanessa Bryant lashed out at actress Evan Rachel Wood for calling Kobe Bryant a 'rapist' in a tweet on the day he died.

A little over a year after NBA legend Kobe Bryant's death, Vanessa Bryant came across an old tweet by actress Evan Rachel Wood. The 38-year-old called out the American actress on Instagram, who has commented on Bryant the day of his death (January 26, 2020). Unsurprisingly, fans came to Vanessa's support, finally happy that Wood was called out for her insensitive remarks a few hours after Bryant, Gianna and seven others passed away in the tragic helicopter crash. 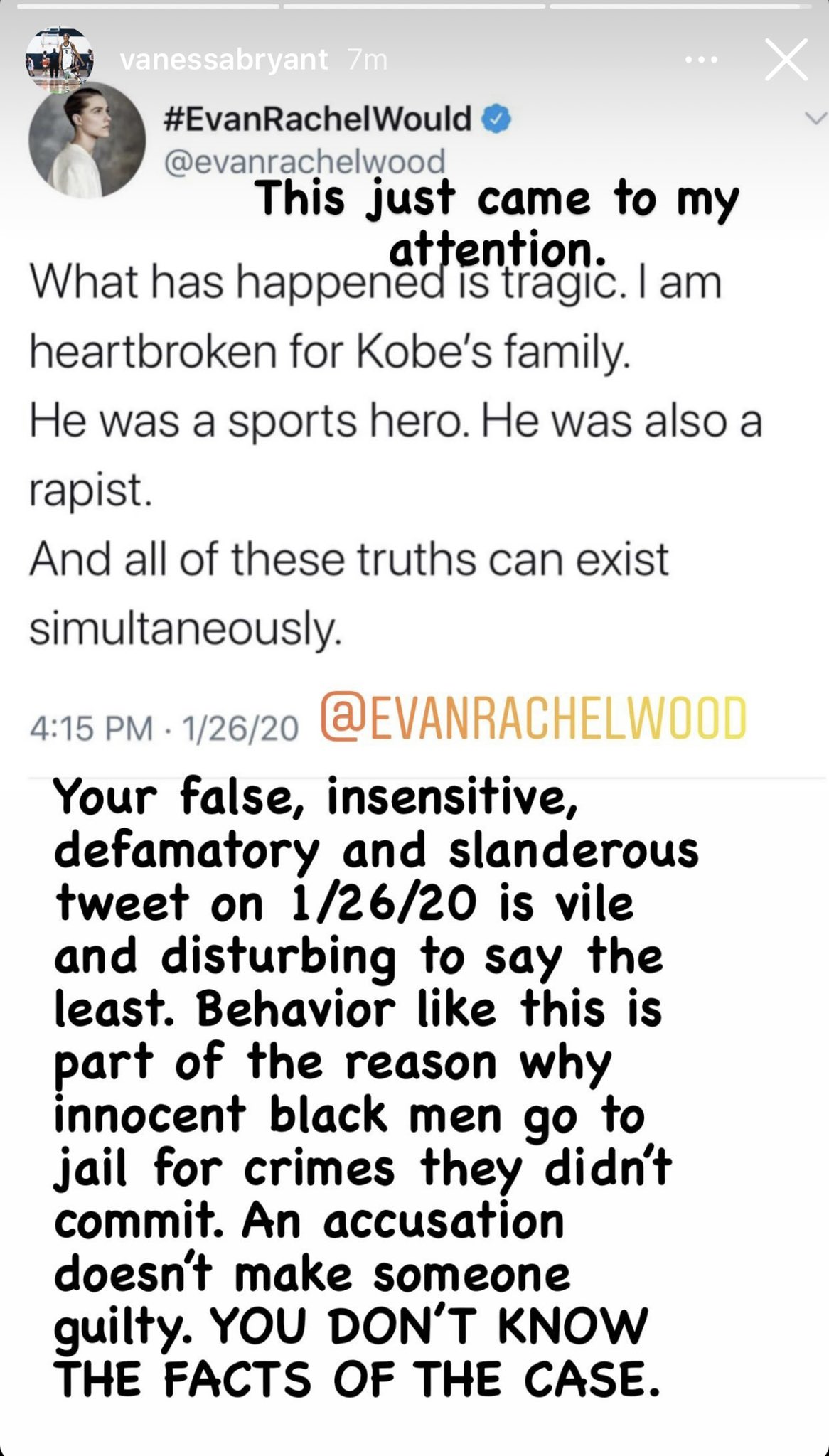 Vanessa ended up sharing a screenshot of Woods' tweet on her IG story. "What has happened is tragic. I am heartbroken for Kobe’s family. He was a sports hero. He was also a rapist," the 33-year-old wrote, stating that all truths are able to exist simultaneously.

"This just came to my attention," Vanessa started in her story, straight up calling Woods' tweet insensitive, defamatory, slanderous and disturbing. Per Vanessa, tweets like those are a reason why innocent black men go to jail for crimes "they didn't commit". "An accusation doesn’t make someone guilty. YOU DON’T KNOW THE FACTS OF THE CASE".

Additionally, Bryant also called out Abigail Disney – a producer who has spoken about Bryant's rape allegations. "I haven’t said anything about Kobe so far because I felt some time needed to pass before weighing in. But yes, it’s time for the sledgehammer to come out. The man was a rapist. Deal with it." Disney wrote.

Fans ended up supporting Vanessa on social media, many pointing out how Woods even worked with director Woody Allen, accused of sexual abuse in 1992. Most only had a problem with the timing of the tweet, and how tweeting something so controversial on the same day is not fair to hose grieving.

Woods ended up firing back on Instagram, sharing stories about people not taking things personally. She further shared quotes about being honest and speaking the truth, while also sharing tweets about how victims and trauma survivors 'crave honesty'. Though this was no direct response to Vanessa's direct message, fans assumed the Woods' stories have to be about the same incident.

The above-mentioned tweet refers to a 2003 incident, where Bryant admitted to cheating on Vanessa and having sex with a 19-year-old resort employee. While he denied the allegations initially, he came back to say it did happen with complete consent. The alleged victim denied what Bryant said, even adding that Bryant was violent.

There were bruises on her neck, while her blood was also found on a t-shirt. Bryant was arrested and charged with sexual assault. However, the charges were dropped in 2004 when the alleged victim refused to testify. Bryant apologized for the incident, maintaining that he thought it had been consensual. After listening to her attorney and personal testimony, Bryant stated that he understood she did not consent to the encounter. The case reached a settlement with a confidentiality agreement and an undisclosed amount of payment after a civil case was filed.