Subramanian Swamy on Wednesday, Dec 15, showed his support for the former T20I & ODI skipper after a question was raised by netizens over treatment of players. 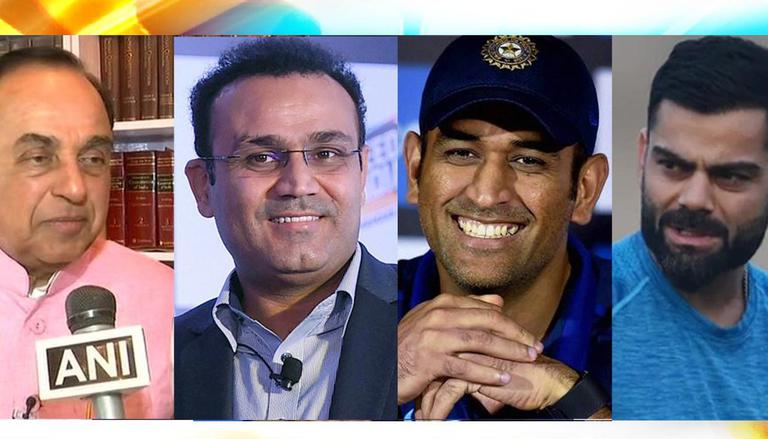 
Rajya Sabha MP and BJP leader Subramanian Swamy on Thursday tweeted about the Bharat Ratna award to be awarded to the former cricketers along with Sachin Tendulkar besides Virat Kohli. On February 4, 2014, Sachin Tendulkar was conferred the Bharat Ratna by the former President of India, the late Pranab Mukherjee at Rashtrapati Bhavan making him the youngest recipient.

Subramanian Swamy has demanded the Baharat Ratna award to be given to former India opener Virender Sehwag, former skipper MS Dhoni and VVS Laxman. Here's what he tweeted;

If Tendulkar was awarded the Bharat Ratna, so should Sehwag, Dhoni and Laxman

Earlier on Wednesday, December 15, Swamy demanded Bharat Ratna be given Virat Kohli while showing his support for the former T20I and ODI skipper. The statement came in response to a tweet put out by a netizen who had questioned why BCCI treated Indian captain and players in a 'shabby manner.' Subramanian Swamy backed the Indian Test skipper asserting that there was no need to treat him like an 'employee' of the BCCI. Lauding Kohli as a 'good batsman', Swamy stated that he instead deserved a Bharat Ratna like cricketing legend Sachin Tendulkar.

I agree. Virat is such a good batsman that he deserves a Bharat Ratna like Tendulkar got. There is no need to treat him like an employee of BCCI.

Team India players on Thursday boarded the plane to South Africa where they will be playing three-match Test series under Virat Kohli followed by ODI series under Rohit Sharma.  Ahead of the departure, Virat Kohli gave an explosive press conference in which he also spoke about the news regarding his rift with Rohit Sharma and availability for ODI series.

It was earlier reported that Kohli has opted not to play the limited over format. However, clarifying his stance on the same in the media interaction, Kohli said, he was and will be available for selection and did not ask for any break from BCCI. Putting an end to the speculation of his rift with Rohit Sharma, Kohli said, “There is no problem between me and Rohit Sharma. I have been clarifying for the past two years and I am tired”.

The Test skipper said that he will give his 100% support to Rohit Sharma and coach Rahul Dravid in the ODI and T20I format for India, to be played in the future.