Ben Stokes and Jofra Archer will be visiting India in April when they join the Rajasthan Royals for IPL 2020. Here is some banter that Stokes was involved in.

The England vs.Australia rivalry has been one of the biggest rivalries in cricket, both on and off the field. And former Australian bowler Mitchell Johnson has often been at the centre of this rivalry in the better part of the last decade. Yesterday, Johnson courted more controversy when he commented on some current happenings in the game through his Instagram story. It was, however, Johnson's fresh dig at Ben Stokes, that got the English all-rounder riled up.

Due to the current COVID-19 scare that has been going around, the England team had recently decided to skip the customary handshake that follows every match, during the upcoming Sri Lanka series. Reacting to this, Mitchell Johnson made a post on his Instagram story where he suggested the English team to use fist pumps to greet the players instead. After this, Johnson proceeded to add in some banter, which involved a reference to the brawl that Ben Stokes had been involved in, a few years ago. Here is Johnson's story. 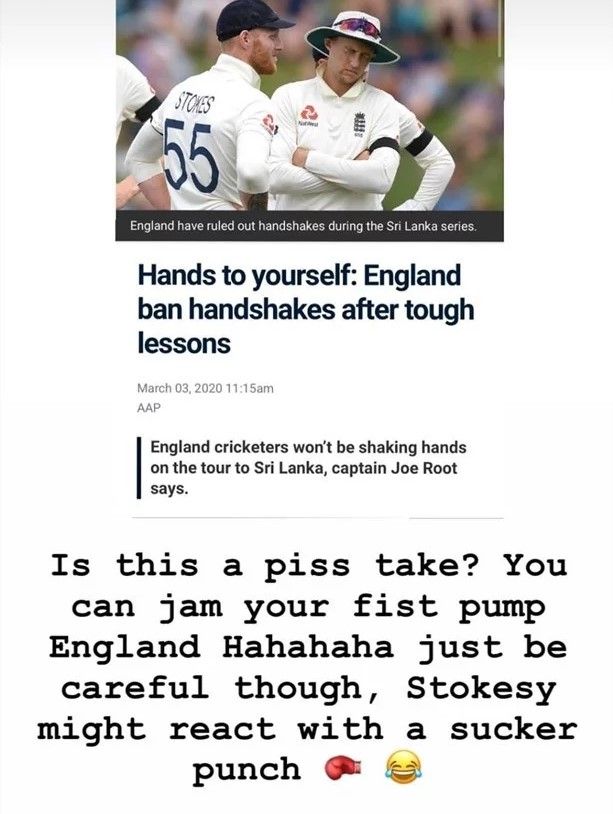 ALSO READ | IPL 2020: Capped and overseas players can be 'loaned' midway this season as per new rule

This dig that Johnson took at Stokes had the English all-rounder agitated and Stokes proceeded to tweet out a part of the song that the Barmy Army used to bully Johnson during the 2010/11 Ashes. Here is the tweet.

Bowl’s to the left bowls to the right I wonder if big bad Mitch likes Marmite https://t.co/6HkfJyPlo3

This tweet by Stokes started a barrage of banter between the English and the Australian supporters and even had a short cameo by the currently-injured Jofra Archer. Here are some of the best replies.

That butter knife sharp wit of the Aussies again. God was going to give them a sense of humour on the eighth day apparently but he finished everything in seven days and never got around to it.

Mitchell Johnson was a superior cricketer to you anyway, with a much better team success record than you Ben.

3rd rate Freddie Mercury lookalike, that’s all he is.

Mitchell Johnson was also at the receiving end of Indian fans recently when he poked fun at another of his rivals, Virat Kohli after his caustic on-field comment during the 2nd Test of the recently concluded tour of New Zealand. He reportedly said that he will make sure that New Zealand will face a drubbing when they come to India next time under Virat Kohli, who also had a horrendous tour with the bat, scoring just 38 runs in 4 innings.

On the other hand, Ben Stokes and Jofra Archer will join forces in April when both of them join the Rajasthan Royals team 2020 for the IPL 2020.