Cheteshwar Pujara, who is otherwise very calm and composed on the field, was off for a short sprint for the celebration of the wicket in an animated manner.

An incident involving Pujara happened in the last over of Saurashtra’s Ranji Trophy match against Uttar Pradesh. It was on the second ball of his over when he picked up the final wicket of the Uttar Pradesh’s innings. As soon as the batsman edged the ball to the slips, Pujara went off for a short sprint for the celebration of the wicket in an animated manner, unlike his usual calm and composed self.

After the end of the day's play, Cheteshwar Pujara posted a video of his wicket-taking delivery on his Instagram handle. He captioned the video, “The day when I changed my batsman status to an all-rounder.”

Fans soon flooded the post with witty comments. However, one comment that left everyone in splits was from India opener Shikhar Dhawan. Looking at Cheteshwar Pujara's celebration after the wicket where he was off for a sprint, the southpaw advised the right-hander to sprint in the same manner while taking a run. 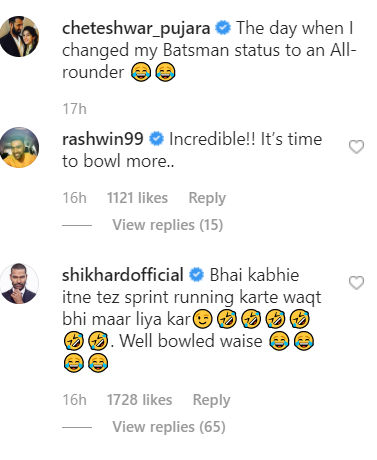