Indian pacers Jasprit Bumrah and Mohammed Siraj were subjected to racial abuse by Australian crowd on more than one occasion during the recently concluded India vs Australia 3rd Test at the SCG in Sydney. The Jasprit Bumrah-Mohammed Siraj racial abuse news caused a lot of stir with Indian fans, as well as, cricketers condemning the regrettable occurrence. After the event came to light, Cricket Australia issued an apology asserting that it followed a 'zero-tolerance policy' to all forms of discrimination and also acknowledged the abuse faced by the Indian pacers.

Now, Australian opener David Warner has apologised to India for the racial abuse that Indian pacers had to face in Sydney. The southpaw took to Instagram and shared a few pictures from the game. In the caption, Warner expressed his joy at being able to play cricket again after recovering from an injury. He added that the result didn't go in their favour but he was happy with the effort that his side put in.

Warner also congratulated India and lauded their fighting spirit for securing a draw from an improbable situation. He also said that he was looking forward to the fourth and final Test at the Gabba in Brisbane. The dynamic opener then apologised to his former IPL teammate Mohammed Siraj and the whole Indian team for the racial abuse they were subjected to, saying that racism and abuse are not in any way acceptable or tolerated anywhere at any time. In the end, Warner mentioned that he expects better from their home crowd.

As soon as Warner uploaded the post, fans flooded the comments section with their responses. Several reactions poured in on Twitter as Indian fans lauded the Australian for his sportsmanship. Here's a look at how how people reacted to Warner's Instagram post. 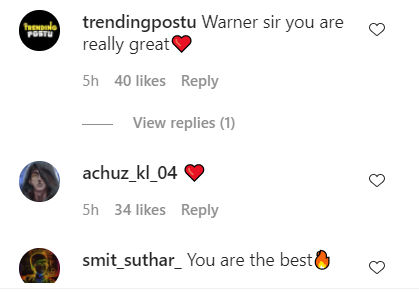 ALSO READ | Rohit Sharma calls Rishabh Pant 'legendary' and it is NOT for his 97 at SCG; see picture

WE RECOMMEND
Gabba Test: Will Pucovski, David Warner remain in doubt as Australia worry after SCG draw
David Warner claims to be in doubt for 4th Test even if passed fit to play in Sydney
David Warner's fitness questioned as Adam Gilchrist, Michael Hussey FUME at his dismissal
David Warner hasn't faced India in Australia since 2015; averaged 49.50 before that
David Warner prepares for Boxing Day Test adorably at home with daughter: WATCH