From Virat Kohli To Lata Mangeshkar, Here's How Much Indians Want MS Dhoni Back

From the skipper of the Men in Blue Virat Kohli to Bharat Ratna Lata Mangeshkar, Indian cricket fans have missed their Captain Cool MS Dhoni on the field

From the skipper of the Men in Blue Virat Kohli to Bharat Ratna Lata Mangeshkar, Indian cricket fans have missed their Captain Cool MS Dhoni on the field and have been crying in unison for his return. MS Dhoni is on a sabbatical ever since India's exit from the World Cup and has categorically stated that he will answer queries about his future only after January 2020. In the course of the year beginning from July, many teammates of the World Cup-winning skipper including Chahal, Virat Kohli, Hardik Pandya and more have taken to social media to express how much they missed their mentor. As 2019 draws to a close, here are the top posts from cricketers and celebrities who missed MS Dhoni in 2019.

READ | MS Dhoni To Shut Down Cricket Academy In Dubai Due To Contractual Issues: Report

The Indian skipper took to the micro-blogging website to share a picture of a moment of MS Dhoni and himself after India's successful run-chase against Australia in the World T20 semi-final The picture, etched forever in the hearts of the Indian fans, is that of Virat Kohli kneeling on the ground, exhausted as MS Dhoni scores the winning runs with a typical MSD finish, a boundary. Australia had set a target of 161 runs for the Men in Blue to chase in order to make it to the finals. Virat Kohli scored a magnificent knock of 82 runs to steer India home to victory. However, the run-chase went down the wire and it was none other than Captain Cool MS Dhoni who was there to finish the match off with Virat Kohli. Virat Kohli and MS Dhoni went on to put up a fifth-wicket partnership of 50 runs which came off 26 balls but it involved an incredible running between the field by both the batsman. MS Dhoni had pushed Virat Kohli at every possible moment to make a run or convert it into a double. As a result, at the end of the successful run-chase that saw India go on to the finals, Virat Kohli was kneeling on the ground, exhausted, as MS Dhoni hit the winning runs and watched on as the ball sailed to the boundary. 'A special night. A game to never forget. This man made me run like a fitness machine', wrote Virat Kohli on the micro-blogging website. 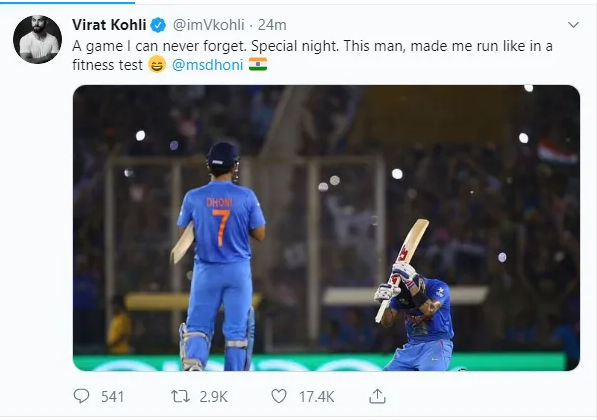 READ | Brendon McCullum Feels Santner Ought To Skip 3rd Test, Wants Him To Work On Some Things

It seems that apart from the cricket fans, even the cricketers are missing India's 2011 World Cup-winning captain Mahendra Singh Dhoni. After Hardik Pandya had posted a throwback picture of himself with Dhoni and his daughter Ziva, Yuzvendra Chahal also came forward to share a memorable picture of himself and the veteran cricketer along with his spin twin Kuldeep Yadav on social media. The trio was clicked together prior to India's World Cup 2019 campaign in England & Wales where they had reached the semi-finals.

India's all-rounder Hardik Pandya shared a picture of himself along with the daughter of one of the best cricketers in the world and said that he missed both of them. Hardik Pandya, who has been out of action for over two months with a lower back injury, took to social media to post a picture of himself with former skipper MS Dhoni and his daughter Ziva and said that he missed the 'little one' and the 'big guy'. Hardik Pandya is not expected to return to action for at least another three months owing to his injury while MS Dhoni, who was last seen at the World Cup, has made himself unavailable until the end of November. He was last seen in action during the semi-final against New Zealand on July 10 where India had suffered a heartbreaking exit from the tournament.