There were a lot of controversial tweets in 2019 featuring IPL, MS Dhoni, Mushfiqur Rahim which were posted but faced so much backlash that they were deleted.

In an era of social media, it can be tough to be a celebrity since every word they utter or write is constantly under the scanner by their fans and critics alike. When one is a celebrity, the responsibility to carry oneself sensibly in front of the public eye becomes even more important. One bad move and their reputation can be ravaged.

Celebrities are used to carry themselves sensibly but there are times when even the most experienced in the field tend to lose it. As a result, they are tempted to post or write something on social media but are eventually forced to delete following a backlash. Let's have a look at 3 such tweets from some of the top cricketers in the year 2019.

Jimmy Neesham's tweet regarding MS Dhoni’s run-out during the 2019 Indian Premier League (IPL) final, did not go down with the fans and the all-rounder was heavily trolled before he finally took the tweet down. One of the biggest talking points and probably the turning point of the game came during Chennai Super Kings’ (CSK) innings when MS Dhoni was dismissed for 2 in the 13th over. Responding to the run-out, Neesham took to Twitter to express what he felt about the incident. “I love how passionate some fans are about our sport. I have huge respect for MS but how anyone could see the below photo and say it’s not out truly astounds me.”

The all-rounder also attached a photo that showed an angle that suggested MS Dhoni was well short of his crease. The tweet, of course, did not go down with Dhoni’s fans and the all-rounder was trolled on social media for the same. It forced Neesham to eventually take down the tweet with a statement that said: “I’m sick of seeing the same dumb comments in my feed 200 times a day. I just don’t actually care.”

When India lost the semi-finals of the T20 World Cup to the West Indies at the Wankhede Stadium in Mumbai in 2016, Rahim took to social media to express his joy at seeing India lose. The demeaning tweet did not go down well with the fans across the cricketing community and Rahim was heavily criticised and trolled for the same. Following a massive backlash, Mushfiqur Rahim apologized for his harsh words but deleted his tweet as he wrote, “Sorry to all of you guys…as I am a big West Indies supporter but anyway sorry again for some harsh words…!!!!” 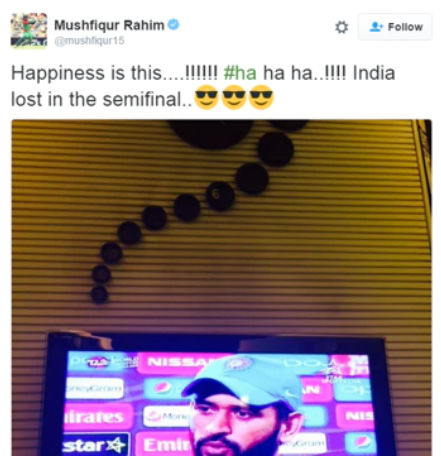 A fan on Twitter posted a video of the 2001 Kolkata Test where Harbhajan became the first Indian to take a hat-trick in five-day cricket. One of the batsmen who was dismissed during the hat-trick, Australian wicketkeeper-batsman, Adam Gilchrist took a cheeky dig at the video pointing out the absence of the Decision Review System (DRS) during the time. Bhajji, who felt that Gilly was trying to question the hat-trick, replied asking him to “stop crying” over the dismissal. The off-spinner, however, deleted the tweet before going on a rant accusing Gilly of “always crying” and that the former wicket-keeper wouldn’t have survived the spell even if the DRS had been placed.