Iceland Cricket have taken yet another dig at the Pakistan cricket team after there is a possibility of the Men in Green losing to England on a 'dead' pitch. 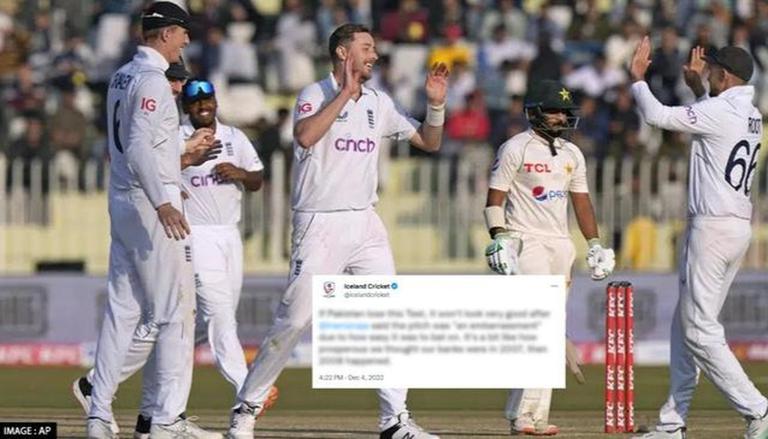 
Iceland Cricket has taken yet another dig at the Pakistan cricket team and their board chief Ramiz Raja after there is a possibility of the Men in Green losing against England, on what seems to be a 'dead pitch' in Rawalpindi. After a virus-hit England squad registered a record-breaking 506 total on Day 1 of the Test match, Raja had referred to the pitch as 'embarrassing.'

At stumps on Day 4 of Pakistan vs England first Test match in Rawalpindi, the Men in Green have scored 80 runs for the loss of two wickets and still need 263 more runs to win. With there being a chance that England bowl Pakistan out on the final day of the Test despite the sides playing on a 'dead' pitch, Iceland Cricket took to their Twitter handle and hilariously compared the Men in Green's situation to that of the financial crisis that took place in 2008. In the process, they also took an epic dig at Ramiz Raja.

If Pakistan lose this Test, it won't look very good after @iramizraja said the pitch was "an embarrassment" due to how easy it was to bat on. It's a bit like how prosperous we thought our banks were in 2007, then 2008 happened.

This was not the only dig that Iceland Cricket took place at Pakistan Cricket as they also wrote that there were finally 'signs of degradation on Day 14 of the Test match even though this format is only played over five days. Additionally, several other instances of Iceland Cricket hilariously trolling Pakistan can be seen in the Tweets below:

Seeing a few signs this morning of deterioration in the Rawalpindi surface. Should begin to take some spin for Leach and Jacks on day 14.

As we've said all along, Rawalpindi is a cracking Test pitch which has left all four results still possible after three days. It was even sufficiently bowler friendly for Anderson to take his first Test wicket in Pakistan, 19 years after debut.

The one saving grace for Pakistan today was that they could wait for sunset to bring matters to an early close. When we play in Iceland in the summer, it simply never arrives. This is 02:30 in June. pic.twitter.com/qObCoF2U4l

With England making a bold move to declare after just scoring 264 runs for the loss of seven wickets in the second innings, all results are still very much possible. In reply, Pakistan has so far scored 80 runs for the loss of two wickets after the early dismissals of opener Abdullah Shafique and captain Babar Azam.

Imam-ul-Haq is currently at the crease alongside Saud Shakeel after Azhar Ali retired hurt. The duo have added 55 runs for the third wicket and look in good shape to help Pakistan get a result in the first Test. As for the England bowlers, captain Ben Stokes and Ollie Robinson have picked up a wicket each.