India vs Bangladesh: Cheteshwar Pujara finished the series as the highest run-scorer with 222 runs in four innings, including a century and a half-century. 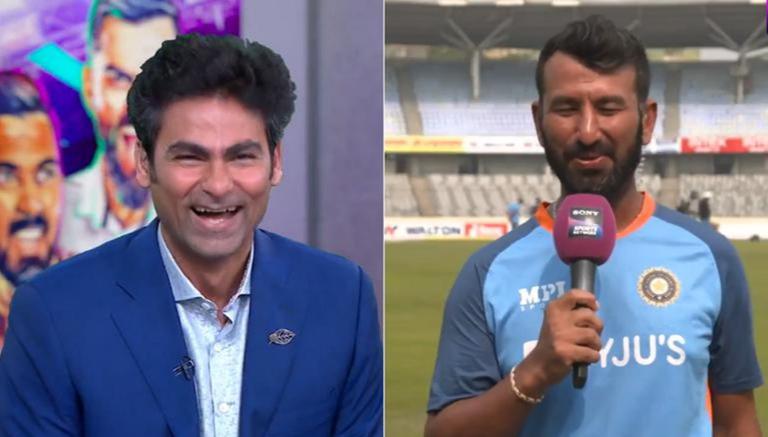 
Former India all-rounder Mohammad Kaif on Sunday asked Cheteshwar Pujara to be more expressive in his celebrations and also requested him to become active on social media. Kaif, while speaking on Sony Sports, told Pujara that he must upload a picture with the trophy he received or else people will keep talking about his strike rate and how slow he plays. Kaif further urged him to be more demonstrative in his celebrations so that his visuals are shown a lot on TV.

“After scoring hundred, your celebration is just too simple. Kuch karo bhai, bat ghumao, aise punch karo (Do something, show your bat, punch in the air) because they show those visuals a lot on TV so people will also remember that yes Pujara has been scoring runs. Or else the talk is always on strike rate or how slow you play. Yeh jo trophy mila hai na, pappi do trophy ko, social media mein daalo (This trophy that you got, kiss that trophy, put that picture on social media) and tell people that you played well and made a superb comeback to win the Player of the Series award. Please, Pujara,” Kaif said. Pujara responded to the request in his typical humble fashion.

"Kaif bhai, I am scoring runs and that's enough for me. The bat does the talking for me. The thing that is more important than a celebration is to score as many runs as I can and make contributions to the team. Yes, of course over a period of time even the team has realised that the way I bat and contribute is important for our side. It is not part of my nature to celebrate too much so I will keep scoring runs and play the role that is expected of me," Pujara said.

Player of the Series @cheteshwar1 talks us through the match and how he is constantly trying to improve his batting skills 🏏 💬#BANvIND #SonySportsNetwork pic.twitter.com/d6TV130qsf

Pujara finishes as the highest run-scorer

Pujara finished the series as the highest run-scorer with 222 runs in four innings, including a century and a half-century. He scored at an average of 74.00 and a strike rate of 55.50. Pujara hit 27 fours in the series. The right-handed batsman scored an unbeaten 102 runs in the third innings of the first Test match to help India put on a mammoth total for Bangladesh to chase down in the final innings. It helped India win the match by 188 runs. He also scored 90 runs in the first innings of the same Test match.

Pujara recently made a comeback to the Indian Test side after being dropped due to his poor performances. He was recalled to the side during the one-off Test against England earlier this year. His performances in the County Championships played a vital role in his return to the Indian Test team. Pujara has played 98 Tests and has scored 7014 runs since his debut in 2010. He has 19 centuries and 34 half-centuries to his name and averages 44.39.