Mohammad Amir, who has currently fallen out of favour with Pakistan Cricket Board (PCB), took a cheeky shot at the PCB after he was left out of the T20I squad.

Pakistan speedster Mohammad Amir, who has currently fallen out of favour with the Pakistan Cricket Board (PCB), took a cheeky shot at the PCB after he was left out of the T20I squad for the upcoming home series against Bangladesh. Pakistan have lost 8 of their last 9 T20I games, including 5 in a row after the World Cup last year. This could be the reason why the Pakistan team management has axed as many as 7 players who toured Australia last year.

Mohammad Amir, meanwhile, faced the axe after his constant struggles in international cricket. During the humiliating 3-0 loss at the hands of a second-string Sri Lanka side, he managed to pick up just 3 wickets in 3 games. He went wicketless in the first two games before picking three in the final game. In Australia, he picked up just 1 wicket in three games.

Yet, Pakistani cricket presenter Zainab Abbas expressed her shock on Twitter to not see Mohammad Amir in the T20I squad against Bangladesh, pointing out his recent spell of 6-17 in the Bangladesh Premier League (BPL).

Also - @iamamirofficial just took 6 wickets in the BPL to take his team through,why exactly has he been omitted from the squad?

In reply, Mohammad Amir wrote that the reason behind his exclusion was his retirement from Test cricket before. It seems that Amir was taking a dig at the PCB and former Pakistan players such as Shoaib Akhtar, who have criticised him for prioritising T20 tournaments around the world than playing for the country. Amir deleted the tweet soon. 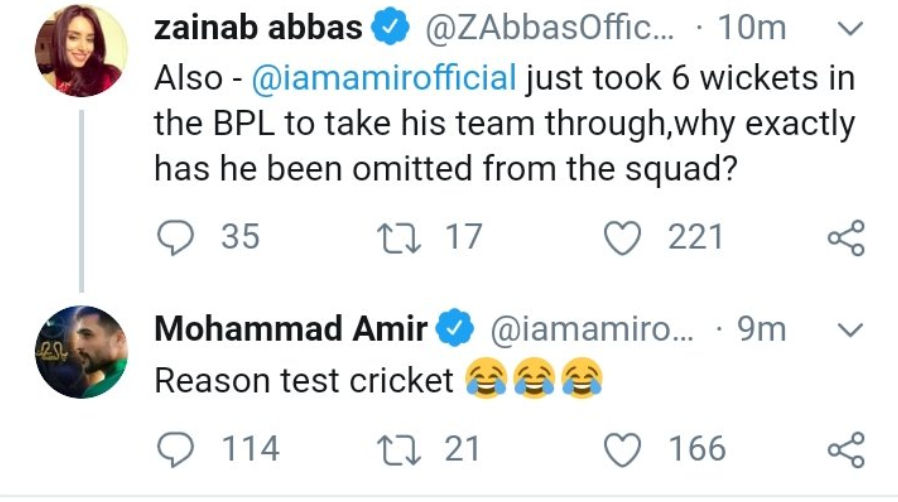 However, after deleting his tweet, he replaced it quickly with a promise that he will get back stronger.

No worries chill everyone i will come back stronger InshAllah ☺️