Michael Vaughan took to Twitter and credited Ravi Shastri for making the team believe that they could compete despite the absence of Virat Kohli. 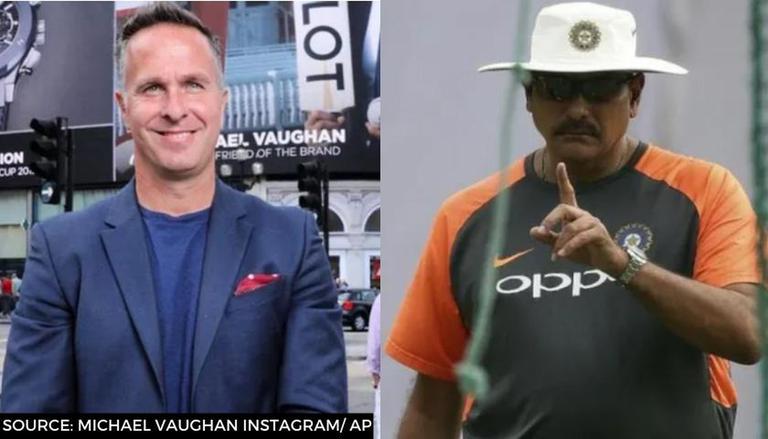 Former England captain Michael Vaughan has been extremely active on Twitter where he is regularly seen sharing his views on the ongoing Border-Gavaskar Trophy. The Englishman has been extremely critical of the Indian team since the tour began in November. From predicting that India will lose to Australia in all formats to claiming that the hosts will whitewash the visitors in the Test series, Vaughan has said everything to deprecate the Indian team.

However, the Indian team has time and again made Vaughan swallow his words by putting in inspirational performances on the field. On Sunday, to everyone's surprise, the former cricketer had some words of praise for Indian head coach Ravi Shastri. Vaughan acclaimed Shastri after Shardul Thakur and debutant Washington Sundar's incredible 123 run partnership brought India back into the game.

Vaughan took to Twitter and credited Shastri for India's fighting spirit in the ongoing Test series despite so many challenges. The 46-year lauded Shastri saying that he loves how the Indian veteran manages the team. Vaughan also said that Shastri deserves a lot of credit for making the team believe that they could compete despite the absence of their captain and batting mainstay, Virat Kohli.

Really enjoy the way @RaviShastriOfc manages this Indian team ... He deserves a lot of credit for making them believe they could compete once @imVkohli had gone home ... !! #AUSvIND

As soon as Vaughan posted the tweet, it was met with a lot of responses. Several reactions poured in as fans trolled the England veteran for his wrong predictions. Some fans also mentioned about ex-India captain Rahul Dravid's role in grooming young cricketers. Here's a look at a few reactions.

Again this guy 🤣🤣 I don't think someone needs to make Indian team believe that they can compete, it was a just a bad inning and myopic guy like u started shouting it wud be clean sweep, now I know who is the real panauti for Aussies 😂😂

Unfortunately, you have to eat your own words. All your predictions have gone wrong and everyone including yourself terribly underestimated the current Team India. Now 1-1 is a possibility.

As soon as you tweet something about Indian team, Some Indian fans instantly be like,, where is the prediction? 😂
Prediction kaha hai?

No. Rahul dravid is managing young talent very well in nca. It's better rahul bhai remains in nca otherwise we may not get the quality of youngsters you're getting. If they are going to change we should get a coach like vvs or tom moody

If you really have to appreciate than do recognize work done by Rahul Dravid. Shastri has definately played role and that is how wrong selection cost us WC Semi Final. Rahane should have been at no.4 in England.

No, I am not agree with you, I think credit should be given to backbone of Indian cricket Rahul dravid , he deserves credit. I enjoy the way Rahane mange this team & making them believe without kohli. credit goes to the India A system,

Unfortunately this is absolutely wrong !!
He doesn't manages #TeamIndia , He was maintained by #TeamIndia .

The back bone of Indian cricket "Sir Rahul Dravid"... He is the one who has groomed lots of players and making sure this Indian team has no problem in future... 🙏🙏

Hahahahahaha i am seriously sorry 4 u @MichaelVaughan , i dont understand y peoples all around d world laughing on your g8 prediction of 4-0 nil in Aussie's favour, do you????😄😄😄

Meanwhile, after gaining a 33-run lead in the first innings, Australia got off to a great start with openers David Warner and Marcus Harris putting on an 89-run stand for the first wicket. However, both openers were dismissed in quick succession. Mohammed Siraj then dismissed Marnus Labuschagne and Matthew Wade within a space of four balls to leave Austalia at 123/4. Steve Smith and Cameron Green subsequently ensured that the hosts did not suffer any further damage as they went into lunch without losing another wicket.

At the time of publishing this article, Australia were at 204-5 with Cameron Green and captain Tim Paine at the crease. The hosts will look to up the ante now and set a formidable target for India and give their bowlers enough time to bowl out the visitors. On the other hand, India will want to wrap the Australian innings quickly and give themselves a chance to beat the hosts at the Gabba and hand them their first loss at the venue in 32 years.