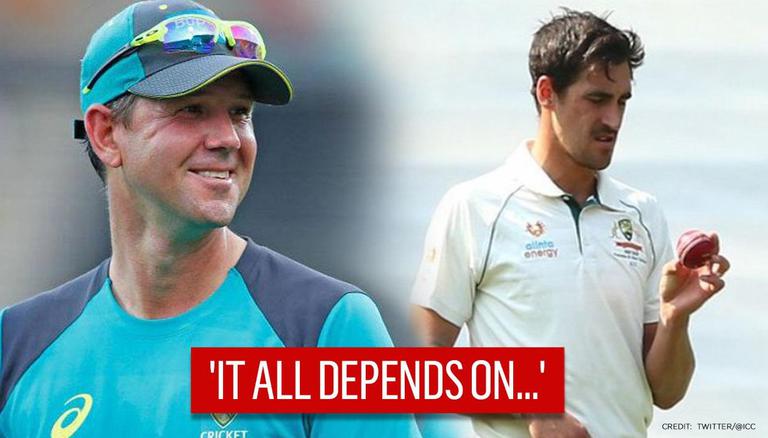 Former Australian skipper  Ricky Ponting feels pacer Mitchell Starc might not be selected in the Australian squad for the upcoming three-match Test series against South Africa unless he is able to redeem the art of swing bowling in Test cricket again.

Even though the Aussie pace spearhead had succeeded in registering eight scalps in the first two Tests against India, he was not able to trouble the Indian batsmen in the final two matches (especially in the second innings of the respective games) as Team India won the four-match series 2-1 to retain the Border-Gavaskar Trophy and win consecutive Test series on Australian soil.

'It all depends on what he does': Ricky Ponting

"It all depends on what he does between now and then in the nets, it's as simple as that. We've been talking about how he just didn't swing the ball. He swung the ball beautifully in the first two Tests but didn't swing it after that," cricket.com.au quoted Ponting as saying.

"That must be a technique thing, whether he was a bit tired or fatigued. But if he can do something to prove to ... the coaches around the squad that he's swinging that new ball, in South Africa the ball does move and we know how dangerous he is when the ball does swing," Punter added.

"But we also know that there might be someone better to play if he's not swinging the ball. It's up to him; if he can get some remedial work done to sort his technique out and he starts swinging the ball in the nets, I'd play him for sure," the three-time World Cup winner explained.

The Aussies will be visiting the 'Rainbow Nation' for three Tests in March. At the same time, there is no official confirmation regarding the dates for the upcoming Test series and even the venues for the same remain undecided as well.

The Tim Paine-led side will be looking to keep their ICC World Test Championship final hopes alive after the recent 2-1 drubbing against India Down Under. At the same time, Australia will be playing red-ball cricket in South Africa for the very first time after the infamous ball-tampering scandal that had shocked the cricket world back in March 2018.

The three Australian players who were accused of tampering with the cricket ball in the Cape Town Test match were temporarily suspended from international cricket. While Colin Bancroft was banned for nine months and fined  75 percent of his match fee, Steve Smith and David Warner were banned for 12 months with the former being fined 100% of his match fee.

Apart from that, both Smith and Warner were also stripped of captaincy and vice-captaincy respectively and reportedly the duo also lost out on a few sponsorship deals as well.