Team India's Rohit Sharma, Shubman Gill, Navdeep Saini and Rishabh Pant are under the BCCI scanner for a potential bio-bubble breach in Melbourne after they reportedly met an Indian cricket fan at a restaurant on Friday. A fan named Navaldeep Singh took to Twitter to share a series of tweets & a video on meeting the Team India stars at a hotel and went on to claim that he had paid their food bill. As per sources, the actions of the Indian cricketers have come under the scanner of the BCCI for not adhering to the bio-bubble rules set by Cricket Australia.

The fan also made a controversial claim that Rishabh Pant had 'hugged' him, however, backtracked and apologised later, revealing that he was 'excited' to meet them and that social distancing had been maintained throughout. As per the bio-bubble rules, the cricketers had been allowed to dine out at a restaurant but were told to avoid sitting indoors as it could increase the chances of contracting the COVID-19 virus. Neither BCCI nor Cricket Australia have officially commented about the issue so far. With two Tests left to compete in, Team India could be dealt with a huge loss if their players are found guilty of violating the bio-bubble.

READ | 'Hitman Show About To Unfold': Rohit Sharma Gets Into Test Mode, Sweats It Out In The Nets 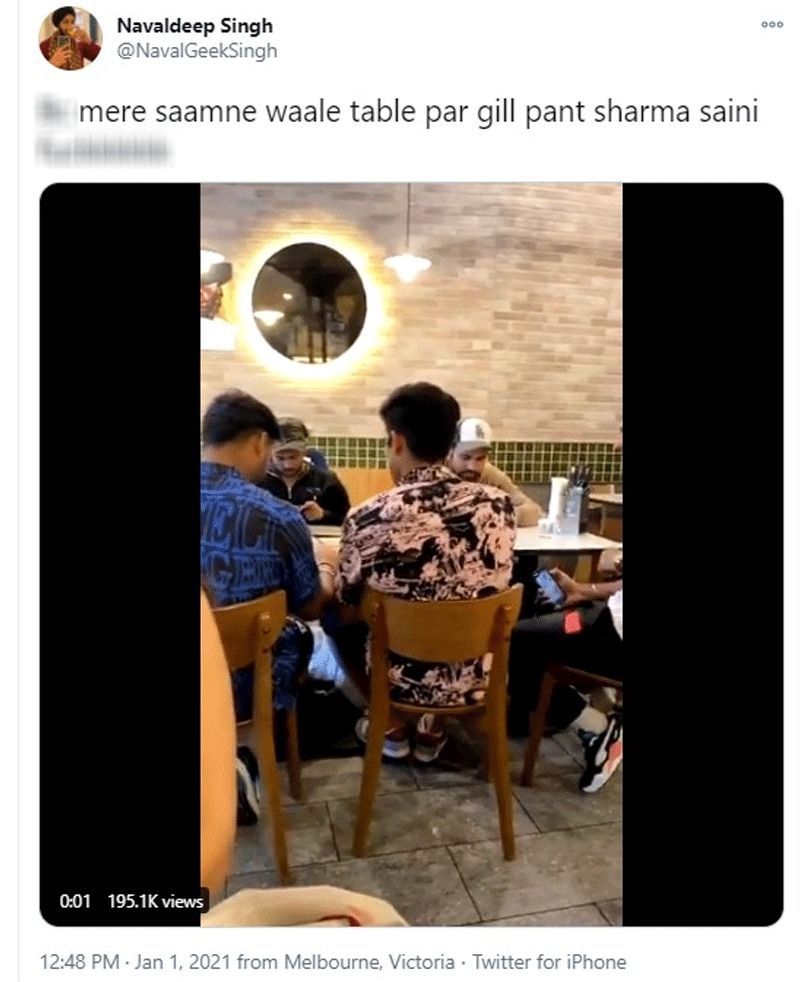 They are not aware but i have paid there table bill :) . Least i can do for my superstars ðŸ¤— pic.twitter.com/roZgQyNBDX

When they got know that i have paid the bill.. Rohit sharma said bhaji pese lelo yaar acha nai lagta.. i said no sir its on me. Pant hugged me and said photo tabhi hogi jab pese loge wapis. I said no bro not happening. Finally sabane photo khichwai :) mja aa gya yaar #blessed

Clarification - Pant never hugged me it was all said in excitement we maintained social distance all thru:) Apologies for miscommunication @BCCI @CricketAus @dailytelegraph

Two days after joining the Indian squad in Melbourne, Rohit Sharma has been appointed as the Vice-Captain for the remaining two Tests in the Border Gavaskar Trophy series, the BCCI confirmed on Friday morning. The swashbuckling opener will assume the role of Ajinkya Rahane's deputy taking over the duties from Cheteshwar Pujara. The decision also means that Rohit Sharma is set to feature in the playing XI for the third Test at the SCG. The board has also included T Natarajan into the squad to replace Umesh Yadav, who has been ruled out of the series. Yadav had sustained an injury in the first innings of the Boxing Day Test at MCG and has been sent to the National Cricket Academy (NCA) in Bengaluru for rehab.

READ | Everyone Is Allowed A Bit Of Slump, I Had That In England: Warner Comes To Smith's Defence

Clearing the cloud of doubt over the occasion for the third Test of the Border Gavaskar Trophy, Cricket Australia has confirmed that the Sydney Cricket Ground (SCG) will host the third Test of the series, as per the schedule. The rising number of COVID-19 cases had cast a doubt on the SCG playing the host for the annual pink Test, putting the national cricket board on high alert. However, officials have affirmed that the COVID-19 threat has subsided enough allowing the match at the SCG to proceed as per schedule.

WE RECOMMEND
Sanjay Manjrekar takes dig at Rishabh Pant, gets slammed on Twitter by keeper-batsman
'Hitman show about to unfold': Rohit Sharma gets into Test mode, sweats it out in the nets
Rohit Sharma set to join Team India on Wednesday in Melbourne, MCG likely to host 3rd Test
Virat Kohli leaves Australia with inspirational words for team as Rohit Sharma quarantines
Rohit Sharma delights fans by announcing arrival in Australia on Instagram; see picture