Shubman Gill has become the talk of the town after his double hundred against New Zealand. Now a tweet from team's captain Rohit Sharma has resurfaced. 
Shubman Gill's magnificent 208 runs off 149 balls is still the talk of the town, and one by one new story are coming. Shubman joined the elite 200 club that includes the team's captain Rohit Sharma. Now, one of Rohit Sharma's old tweets has resurfaced on the internet again, where the former calls Shubman the 'future' of Indian cricket.

A tweet from the past resurfaced on the internet after Shubman Gill's double-hundred knock against New Zealand in Hyderabad. Shubman had wished Rohit Sharma his birthday saying, " “Well no one does pull shots better than the #Hitman Happy Birthday! Rohit Sharma.” Rohit Sharma replied to Shubman's tweet and said, “Thanks Future”. 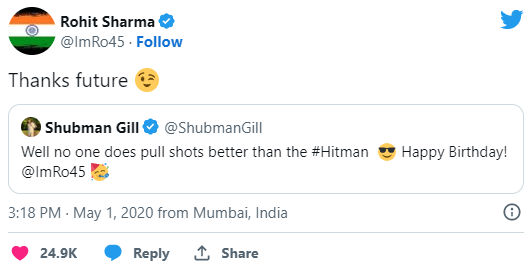 Though Twitter and Rohit Sharma have a very old history. A case from 2011 is just an example where Rohit praised Suryakumar Yadav on Twitter and we all now know what kind of a batsman Surya has now Surya become.

Rohit Sharma wrote, “Just got done with the BCCI awards here in Chennai..some exciting cricketers coming up.. Suryakumar Yadav from Mumbai to watch out for in future!."

Just got done with BCCI awards here in chennai..some exciting cricketers coming up..Suryakumar yadav from Mumbai to watch out for in future!

Speaking about Shubman Gill he played a match-winning knock against New Zealand and also held Team India's innings from one end. He became the fastest Indian to score 1000 runs in ODI leaving Virat Kohli and Rohit Sharma behind. Shubman reached the landmark in 19 innings. Shubman was also the fastest to make 500 ODI runs doing it in 10 innings.

Before the first ODI versus New Zealand, there was a question mark that why Shubman Gill is playing ahead of Ishan Kishan as he also scored a double hundred versus Bangladesh in the last match he played. But Shubman shut everyone's mouth with his performance and also cemented his position in the team.

Suryakumar Yadav often known as 'SKY' is also a find for India and has proven to be an 'X' factor in the last few matches.