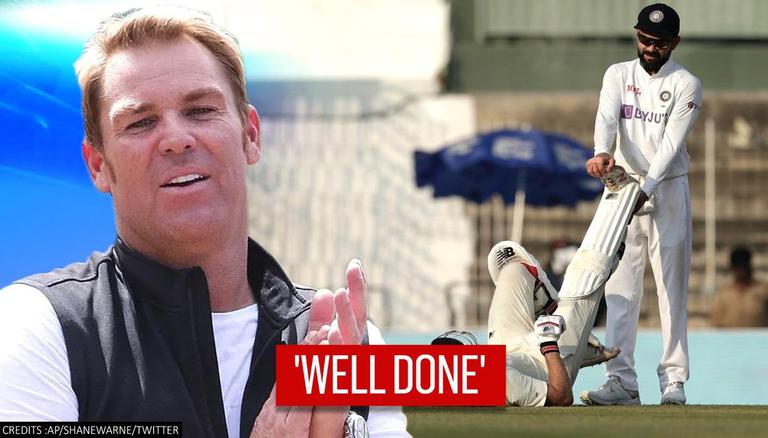 Australian spin legend Shane Warne heaped praise on Indian skipper Virat Kohli after he went up to check on his opposite number Joe Root and helped him stretch his legs after the number three batsman had suffered from muscle cramps on Day 1 of the ongoing first Test match at MA Chidambaram Stadium, Chennai.

Kohli was lauded by one and all for his sportsmanship spirit. Root on the other hand took full advantage of a perfect batting track as he went on to register his fifth double-century in the game's longest format. He was eventually dismissed for 218 after being trapped plumb in front of the wicket by left-arm spinner Shahbaz Nadeem.

Taking to the micro-blogging site, the former leggie shared an image of Kohli stretching his English counterpart's legs after he had suffered from cramps. 'Warnie' said he loved what he saw on the cricket field and then hailed 'Captain Fearless' for his kind gesture. The 1999 World Cup winner concluded by congratulating Root on another wonderful innings.

Love this !!!! Well done @imVkohli and congrats to @root66 on another wonderful innings #SpiritOfCricket ❤️ pic.twitter.com/hUBFZfoZ9X

At the same time, the batting megastar's gesture towards his opposite number was hailed by netizens as several lauded the Indian skipper for upholding the spirit of the game. Several fans also recollected the similar gesture by former India skipper MS Dhoni during the series-deciding fifth ODI against South Africa at the Wankhede Stadium back in October 2015  helped Faf du Plessis when the Proteas batsman suffered from cramps.

India who had resumed Day 4 at 257/6 could only manage to add 80 more runs to their overnight score before being bundled out for 337. Meanwhile, England in their second innings really struggled to get going on what seems to be a tough batting surface as only Test skipper Joe Root (40) could offer some resistance as the visitors were bundled out for 178 to set up a target of 420 runs for India in order to go 1-0 up in the four-match series.