Virat Kohli Superfan: This Man Has 16 Tattoos Dedicated To The Star

Virat Kohli met a superfan who has his face and jersey number tattooed on his body; the fan he wants another tattoo with Virat Kohli holding 2023 WC Trophy

Cricketers in India have a fan following like nowhere in the world. These fans literally worship their favourite cricketers. There are millions and millions of fans who express their love in different ways. We know of Sudhir Gautam, who is a die-hard Sachin Tendulkar fan whereas Hari Saravanan is an MS Dhoni fan. Both are often spotted in stadiums waving the tricolour and cheering the Indian team.

Indian captain Virat Kohli is one such cricketer who has a huge fandom all across the globe. His fans follow him wherever he goes. There are some fans who want to meet him, some fans who like to keep his pictures, while some like to watch him play. But there is one fan who set himself apart from the rest. He has joined the likes of Gautam and Sarvanan in the die-had fans list.

Here's a picture of Kohli embracing his superfan: 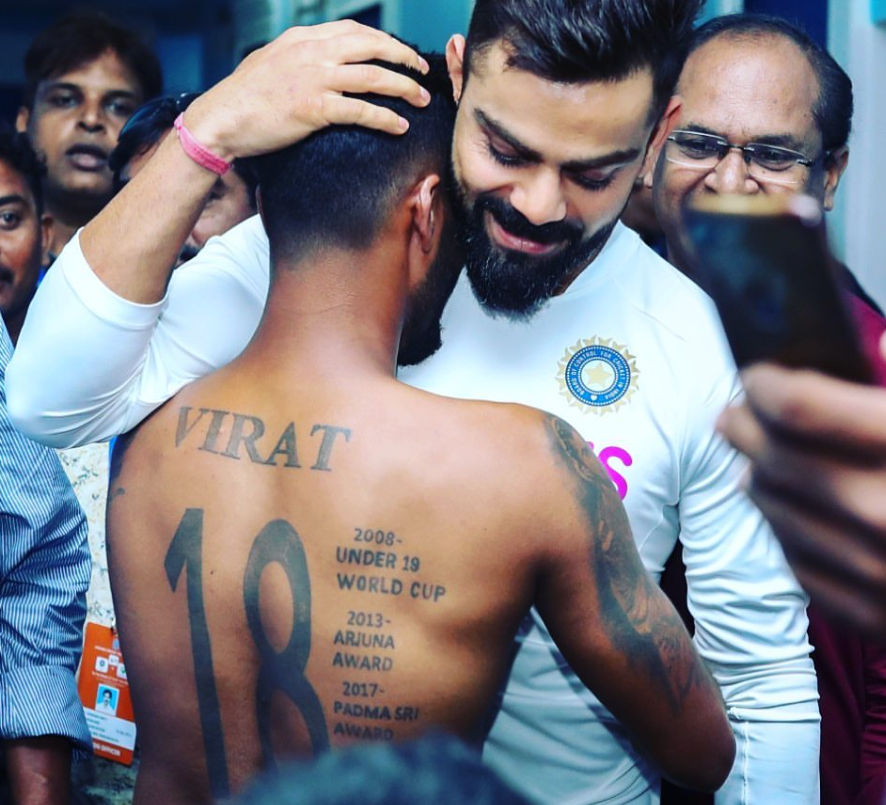 'Virat Kohli is my God'

He considers Virat to be his god and says that people get tattoos as fashion or to show respect to god. Kohli is his god and this is his way of showing his love and respect for him and his game. He has 16 tattoos and has been getting these since 2016 and looks forward to adding another: one where Kohli holds the 2023 World Cup.

A contractor by profession, Behera, arrived in the port city one day before the first Test at Vizag and his long-awaited dream of meeting Virat Kohli came true.

In an interview, Behera said when he arrived at the place, he somehow managed to enter the stadium. When Kohli went out to train, he took off his shirt. There were some fans around to see the Indian team. Everyone started cheering. 'Kohli. Kohli' was heard everywhere. That scene caught the attention of many in the stadium.

He added that Kohli waved his hand towards him and asked him to enter. He was smiling. Kohli shook his hand and hugged him. He could not hold back his tears as this was the moment he had been waiting for four years. Kohli hugged him and calmed him down. He saw all his tattoos and counted them and assured him that he will meet him soon.

It was an unforgettable day for Behera and he was delighted as he was not able to digest the fact that he just met his idol. He said that he had tried a lot of times to meet the Indian skipper but could not and thanked God for the opportunity. He wants to be known as the Virat superfan, he concluded.