Rishabh Pant fell asleep behind the wheel which caused the accident. Pant's condition at the moment is stable but he remains under doctors' supervision. 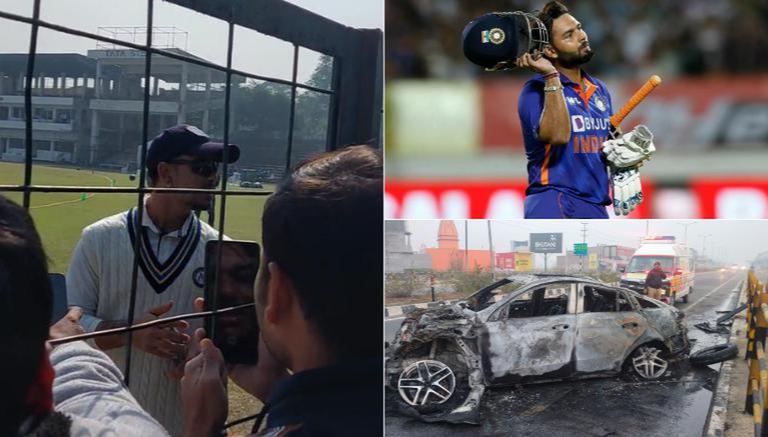 
Indian wicketkeeper-batsman Rishabh Pant on Friday met with a horrific car accident on the Delhi-Dehradun highway while travelling to Uttarakhand from Delhi. Pant was going to Roorkee to meet his relatives but his car collided with a divider on NH-58 near Manglaur, resulting in the player being admitted to a hospital in Dehradun. Meanwhile, Ishan Kishan, who was playing a Ranji Trophy game for Jharkhand on the day of the accident, was shocked to learn about the unfortunate incident while taking selfies with fans.

Kishan was busy playing a Ranji Trophy match against Services when he learned about Pant's car accident from fans, who had come to see the Indian wicketkeeper play at Keenan Stadium in Jamshedpur. Kishan was shocked when he got to know about the news. His reaction was captured by one of the fans on camera. A video of Kishan's reaction is now going viral on social media. One of his fans said, "Rishabh Pant ka accident ho gaya hai (Rishabh Pant has met with an accident). Kishan responded after hearing what had occurred, saying: "Kya? (What)".

Pant was alone in his Mercedes GLE when the accident occurred at 5:30 am on December 30. He is said to have smashed the windscreen of his car to escape before the vehicle blew up in flames. According to the police, Pant fell asleep behind the wheel which caused the accident. His condition at the moment is stable but he remains under doctors' supervision.

Pant was expected to return to the Indian Test side for the Border-Gavaskar series against Australia in February. However, the accident will most likely delay his return to the national team. He was last seen in action during the two-match Test series against Bangladesh where he scored 46 runs in the first Test and then scored 93 and 9 runs in the second match. India won the series 2-0.

Kishan is being considered as one of the potential replacements for Rishabh Pant in the Border-Gavaskar series against Australia. Kishan recently scored a double-century in an ODI match against Bangladesh. He can play his game at a quick pace similar to how Pant used to do it for the Indian team in Tests.