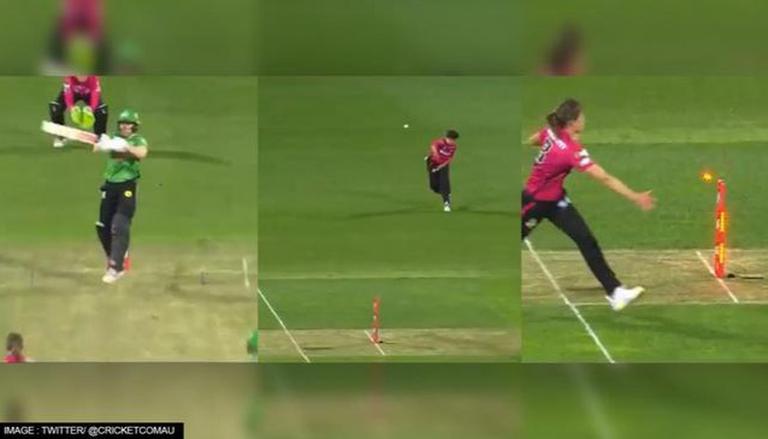 What a throw! Welcome to the @WBBL, Shafali Verma 🔥@CommBank | #WBBL07 pic.twitter.com/X6mhtzwUp8

The display of brilliant aim and fielding was witnessed in Ellyse Perry's over when the batter played the pull shot and the ball went straight to Shafali. Shafali who had only one stump to aim hit the bulls-eye and dismissed Annabel Sutherland on 14. Soon, the video of Shafali Verma's fielding brilliance went viral on social media and it caught the attention of former Team India cricketer Wasim Jaffer.

Wasim Jaffer took to his Twitter handle and lauded the 17-year-old batter for her brilliant fielding. Jafer also shared a GIF of Shafali's bullseye during the Women's Big Bash League.

READ | Cricket 22 to include Big Bash, CPL and leagues from all over globe; See gameplay

Shafali Verma & Radha Yadav were inducted in the Sydney Sixers for the WBBL 2021. In Women's T20I Shafali has scored 683 runs from 26 matches. Radha Yadav is a slow left-arm bowler who has picked up 58 wickets from 40 Women's T20I matches.

Just one stump to aim at from her angle, and she did it! Great through! 🔥🔥🔥

With only one stump visualising🔥

Coming back to the Sydney Sixers Women (SYSW) vs Melbourne Stars Women (MLSW),  Ellyse Perry-led squad defeated Lanning & CO by 6 wickets on the opening day of the competition at the Bellerive Oval on Thursday. The Sixers appeared to be on their way to a comfortable win before losing three wickets including that of Healy. But Nicole Bolton (7 not out) and Angela Reakes (3 not out) steered them home. Earlier, sent in to bat by Sixers captain Ellyse Perry, the Melbourne Stars rode on a quick-fire 54 not out (31 balls, 5 fours, 1 six) by Elyse Villani to make 99 for 1 in 11 overs. Shafali helped break the Stars' opening partnership by running out Annabel Sutherland (14).