Inter Milan new badge: The new logo for the Nerazzurri was reportedly leaked by Nike on Wednesday, amid rumours of a potential name change for the club. 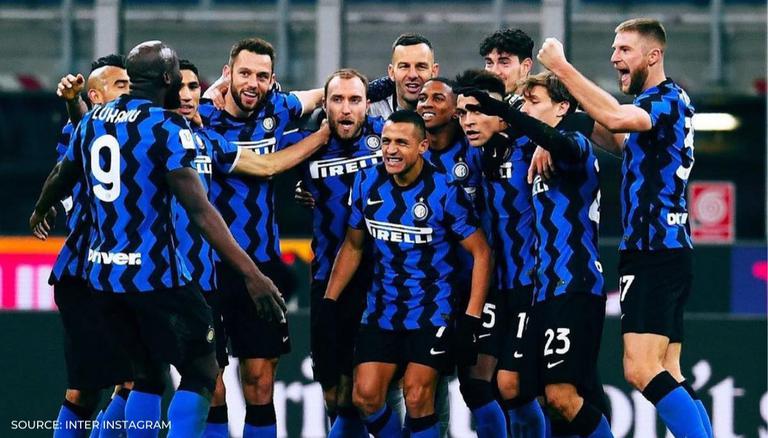 Earlier this month, reports claimed that Serie A giants Inter Milan are set to undergo a  historic name change of the club to celebrate their 113th anniversary in March. The club's official title is said to be changing from "Football Club Internazionale Milano" to simply "Inter Milano" and their new badge has now reportedly been leaked online. The new logo reportedly keeps the I and M lettering in a prominent role, as well as the circular shape and border with the “FC” removed, although it hasn't been confirmed as of yet.

ALSO READ: Jose Mourinho Takes Jibe At Klopp & Co. For Getting Away With Touchline Outbursts

According to reports from Footy Headlines, Inter Milan's new badge was leaked via a Nike product sample that was released online. The leaked image was quickly deleted but fans were able to grab a screenshot of what Inter's new club badge will look like. The current badge had the letters FCIM in the design, while the new one just has IMO (for Inter Milano).

The jersey displayed the new Inter badge along with the gold and black design, surrounded by a thick circle. The star on top of the letters "I" and "M" remains to highlight the fact that the club have won at least 10 league titles. The Nerazzurri have won 18 Scudetto's but have been stuck on that figure since 2010.

ALSO READ: New Chelsea Manager Thomas Tuchel Vows To Create A Team Nobody Would Want To Play Against

Inter Milan name change to be announced in March?

According to reports from  La Gazzetta dello Sport, Inter are planning to announce their new name and change in the logo on March 9, 2021. It is believed that Inter are still in the process of changing their club crest and the design idea comes after rivals Juventus made waves when they opted to change their badge in 2017. The aim is to have a minimalistic but stylish logo to attract new global sponsors.

Inter are currently struggling with their balance sheets with players wage payments also being delayed. They are also engaged in a legal dispute with David Beckham's new MLS side being named Inter Miami. The Italian side have claimed the term 'Inter' is synonymous solely with them and are suing for trademark infringement.

At least things on the field are going well for Antonio Conte's side. Inter are currently in second place in the Serie A standings, two points behind league leaders AC Milan. They also progressed to the semifinals of the Coppa Italia after beating the Rossoneri 2-1 on Tuesday.