A captain struggling to find his bearings, a team in which few players were picked on the basis of reputation & more contributed to India's disastrous T20 WC 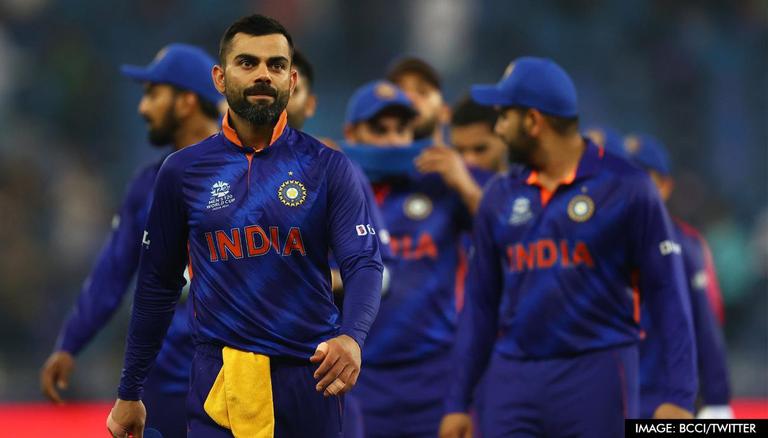 
A captain struggling to find his bearings, a team in which few players were picked on the basis of reputation than current form, and jaded bodies desperately seeking a break from the bio-bubbles have all contributed to India's disastrous T20 World Cup campaign. In 2021, it will be very difficult to point fingers at one particular cause for this shoddy performance -- it could be those first 12 balls from Shaheen Shah Afridi that scarred them, or perhaps it was about "not being brave enough" in terms of execution as skipper Virat Kohli said after the defeat to New Zealand.

"I am shocked, not just by the loss, it's the manner in which they have lost. You can have all the support staff but it's about execution. It's the cricketers who have to go out there and play," when someone as reticent as VVS Laxman is sharp and pointed in his post-match analysis on 'Star Sports', it is a sure sign that all is not well.

The PTI does a lowdown of series of possible reasons that contributed to the disastrous show so far:

Every captain has a shelf life. It's just that one needs to realise when he has reached the end of that cycle. Sunil Gavaskar had that judgement, and so did Mahendra Singh Dhoni.

Virat Kohli realised it just before the T20 World Cup and very rightly decided to relinquish his leadership role in the shortest format (including IPL).

But why has Kohli never been successful in multi-team events like the T20 World Cup, 50-over World Cups, Champions Trophy or the IPL? And why is he very successful in bilateral series? These are questions that have been befuddling for the cricket fraternity.

If one talks to people in the corridors of Indian cricket, they believe that Kohli, while playing bilateral cricket, always gets a chance to do course correction against same opposition if anything goes wrong.

If there is one opposition for five games in a row, he finds it easier to plan and lead. The moment it becomes a multi-team event, where the plan and strategy changes one game after the other, he never seems in control.

READ | Batters attacked bit early to give cushion of extra 30 runs but ball was holding up: Bumrah

The team selections lack consistency and punting Ishan Kishan as an opener instead of Rohit Sharma was negative strategy on Sunday night. Trying to shield Rohit was a signal to the opposition that the team was under pressure.

"Now what has happened is that Rohit Sharma has been told that we don't trust you to face the left-arm fast bowling of Trent Boult. If you do that to a player who has been playing at position for so many years, he himself will think that he may be he doesn't have the ability," Sunil Gavaskar said on 'India Today'.

Fallout: Don't be surprised if a new ODI captain takes over as well with the 2023 50-over World Cup being just two years away. This team needs a man with  new ideas and fresh direction.

2) Lack of communication: Case in point being Hardik Pandya

Hardik Pandya, since his 2019 lower back surgery, has not been fully fit and it will be very, very difficult to regain his full bowling fitness, considering that batting is his primary skill.

So, who was the one who misled on Hardik Pandya's fitness status before the team for the World Cup was selected?

Was it chairman of selectors Chetan Sharma? But then why would he unless misguided by the team management? But Chetan is now copping the flak for stating on record that Hardik will bowl during the IPL at the team selection press conference.

By the time they understood that Hardik was not fit for selection, it was too late and as damage control, dropped Axar Patel to take Shardul Thakur as an all-round back-up. But this was after the horse had bolted the door.

Hardik didn't bowl a single over in the IPL and his MI skipper Rohit Sharma said that he might start bowling in a week.

Before Pakistan game, skipper Kohli said that they are looking at Hardik purely as a batter.

He scored 8 off 11 against Pakistan and 23 off 24 against New Zealand, both underwhelming efforts on decent batting tracks.

Finally, he bowled two overs against New Zealand but if one checks the speed and the effort, it was a laboured one, more so knowing that his auction price might just take a hit with Mumbai Indians unlikely to retain him.

Fallout: Hardik might just find himself out of favour against New Zealand in T20I series at home and would need to again show his all-round prowess before he makes a comeback. Venkatesh Iyer is waiting in the wings.

3) National selectors will have some answering to do

T20 perhaps is the only format where reputation counts for little with any team on a given day capable of upsetting a more fancied opposition. The national selection committee didn't factor in current form during their T20 World Cup picks when they had IPL form for reference.

Would it have hurt to pick a Rururaj Gaikwad in the suad going purely by his form? He won the Orange Cap and dominated attacks on the UAE strips.

Bhuvneshwar Kumar has been plagued by injury, lack of pace, swing and poor form for the past two years and yet, he was picked ahead of Deepak Chahar, someone, who has the knack of getting breakthroughs in Powerplay.

Bhuvneshwar had only six IPL wickets and if that's not poor form, what else is?

Similarly, Rahul Chahar was picked for having greater pace off the surface on slow UAE tracks and Yuzvendra Chahal, who was fabulous and one of the main factors for Royal Challengers Bangalore qualifying for the play-offs, wasn't even kept in the reserves.

Looking at how Ish Sodhi tormented the Indians, Chetan and his colleagues Sunil Joshi, Harvinder Singh, Abbey Kuruvilla and Debasish Mohanty will surely feel the heat.

For a team that has been living out of suitcases for more than four months, the bubble fatigue had to catch up and BCCI's scheduling of the remainder of Indian Premier League did play a massive role.

It was nobody's fault as COVID-19 wreaked havoc on the scheduling. For a tournament where billions of dollars are at stake, abandoning it was never an option for the BCCI and the only window available was before the T20 World Cup.

The players didn't have any turnaround time as such.

"You can't control the scheduling and what tournament is played when. Being in the bubble and staying away from family does play role," said pacer Jasprit Bumrah after Sunday's loss.

"BCCI has tried to make us comfortable. We try to adapt but bubble fatigue and mental fatigue creeps in as you are doing same things again and again and again," he explained.

Fallout: Even if the players want to play the home series against New Zealand, the, likes of Kohli, Rohit, Rahul, Bumrah, Pant and Shami deserve a break before the Test series that starts November 25.

5)  Did commercial and broadcast interests become a bane?

Virat Kohli lost two tosses under Dubai's night sky and it became decisive with the dew setting in. A close look at the schedule and one will find that all top teams like England, Australia, South Africa, Sri Lanka have at least one afternoon game (2pm local time and 3:30 pm IST) where dew doesn't play a role whether a team bats first or second.

But keeping broadcasters' interests in mind, both hosts (BCCI and ICC), decided to have all India games at 7:30 pm IST and with a week's gap between two group matches against marquee teams (Pakistan and NZ).

This was done keeping the huge Indian TV audience in mind along with peak advertisement slots.

Also all India matches, save one, were scheduled in Dubai, which has the largest crowd capacity which ensures proper gate money for the host association (in this case BCCI with the Emirates Board being facilitators).

The strategy boomeranged badly. India didnt have an option of playing at Sharjah in an afternoon game. The Sharjah pitch has now settled down and become better for batting.

Fallout: The ICC, BCCI and host broadcaster will have to deal with "exponentially" lesser buzz after November 8, if Afghanistan don't beat New Zealand. ICC now have s situation of semi-finals possibly without India. Not the greatest news for the tournament.