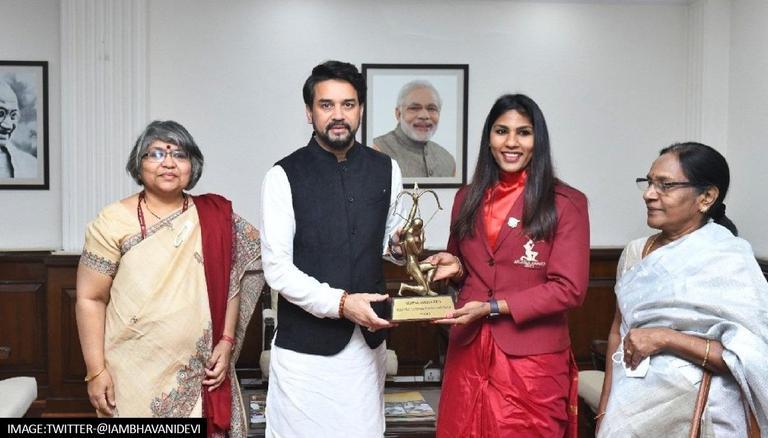 
Union Sports Minister Anurag Thakur on Monday conferred fencer Chadalavada Anandha Sundhararaman Bhavani Devi or CA Bhavani Devi with Arjuna Award 2021. CA Bhavani Devi was conferred with Arjuna Award for her exemplary contribution to fencing and representing India at the global level. She was India's only entry into fencing at the Tokyo Olympics 2020. President Ram Nath Kovind on Saturday handed out the National Sports Awards 2021 which was announced by the Ministry of Youth Affairs and Sports earlier this month.

Union Minister Anurag Thakur informed that Bhavani could not receive the prestigious Arjuna Award from the President of India as she was participating in an event in France and therefore she could attend the special event which was organised at the Rashtrapati Bhavan.

Union Minister @ianuragthakur congratulated @IamBhavaniDevi on being conferred the Arjuna Award for her exemplary contribution to fencing and representing India at the global level.

She was participating in a competition in France and could not attend the award ceremony. pic.twitter.com/LijokJMamk

After receiving the prestigious Arjuna Award, CA Bhavani Devi took to her Twitter handle and stated that she is emotional as holding the Arjuna Award was her childhood dream. Bhavani also expressed her gratitude for the Arjuna Award 2021.

Holding the Arjuna Award 🏹 was My Childhood Dream, and today, it happened. I am so much Emotional 😢

Work Hard & Play for the Country. One day, the country will pay back.
Thank YOU 🇮🇳 🙏 pic.twitter.com/iL4OssYKmo

CA Bhavani Devi got off to a good start at the Tokyo Olympics as she won her first match comfortably. She defeated Tunisia's Ben Azizi Nadia 15-3 in just six minutes and 15 seconds. However, the nine-time Indian national champion lost the round of 32 match against France's Manon Brunet in women's individual sabre. Brunet dominated Bhavani over the two halves and eventually defeated the Indian by 15-7 to book her place in the Round of 16.

After suffering the defeat, Bhavani took to her Twitter handle to post an emotional message where she apologized to Indian fans for not progressing any further. Although CA Bhavani Devi's efforts at the Tokyo Olympics went in vain, PM Modi was quick to console her and point out that her efforts were all that mattered. He also told her that she was an inspiration to all the young Indians who were planning on making a career in sports.

PM Modi then hosted the Indian athletes in August who participated in the Tokyo Olympics including CA Bhavani Devi for breakfast at his 7 Lok Kalyan Marg residence and compared her to 'Jhansi Ki Rani'.