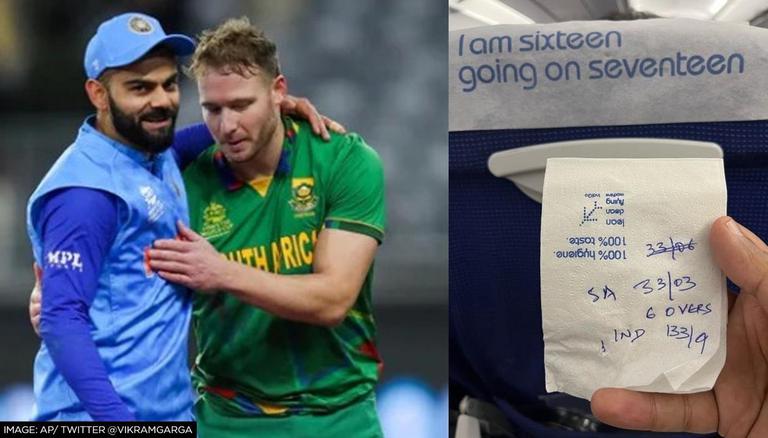 
Cricket is a sport which brings millions of fans together. People are glued to their TV sets or any other gadget watching and supporting their favourite team and cricketers in action. Currently, the T20 World Cup 2022 is being played in Australia and fans are ensuring they keep a tab on the scores and other updates anytime, anywhere. A tweet from a cricket fan has been going viral in which the person posted a photo of a note sent by the pilot during the flight about the score update during the India vs South Africa match.

Team India faced South Africa in their T20 World Cup 2022 group stage match on Sunday, October 30. A Twitter user named Vikram Garga shared a post which showed a piece of tissue paper that had the updated score scribbled on it from the India vs South Africa match. The pilot had sent the update to a passenger when asked for it mid-air. Indigo not only liked the tweet but also responded by saying," we're glad to see this. We wish to see you on board soon again."

After winning the toss and opting to bat first, India lost both their openers Rohit Sharma and KL Rahul inside the first five overs. Lungi Ngidi removed both the batsmen for 15 and 9 runs respectively. India's situation got worse as three more wickets fell in the next four overs. India lost half of the team for just 49 runs on board with Ngidi accounting for two more wickets, of Virat Kohli and Hardik Pandya.

It was Suryakumar Yadav who gave some respect to India's total by playing an explosive knock of 68 runs in just 40 balls. The batter was eventually dismissed by Wayne Parnell. The left-arm pacer finished with three wickets, while Anrich Nortje had one wicket to his name. Indian bowlers began with a bang as Arshdeep Singh accounted for the wickets of Rilee Rossouw and Quinton de Kock in one over to put Proteas on backfoot. However, the match-winning partnership between Markram and David Miller and the sloppy effort on the field by India led to them losing the match in the final over.