Sikandar Raza was the standout player in the T20 World Cup match between Zimbabwe and Pakistan as he picked three wickets when his team needed them the most. 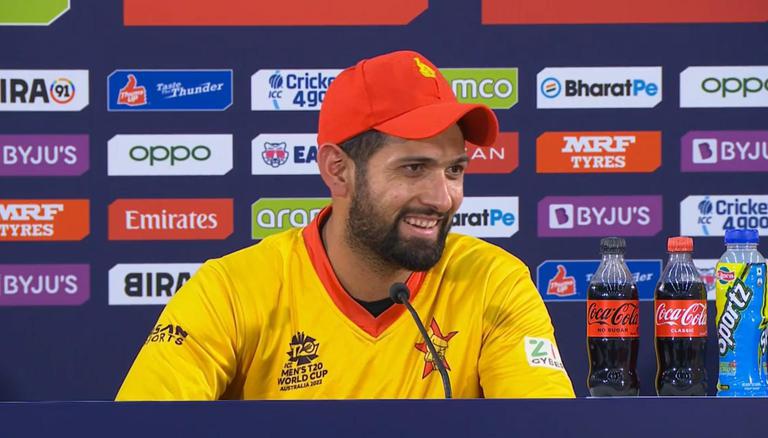 
Zimbabwe all-rounder Sikandar Raza took a savage dig at Pakistan after a Pakistani journalist questioned him on the outcome of their game on Thursday. Zimbabwe handed a humiliating defeat to Pakistan in their second Super 12 match of the ongoing ICC Men's T20 World cup 2022. Raza played a crucial role for his team to help them emerge victorious in the game.

When a Pakistani reporter questioned Raza about just when his team began to feel like the match would go their way, the all-rounder responded, "Before the first ball was bowled." Raza's savage reply is now winning plaudits on social media with netizens lauding the all-rounder for roasting the Pakistani journalist for his presumptuous question.

Raza was the standout player in last night's game between Zimbabwe and Pakistan as he picked three wickets when his team needed them the most. When Raza was brought back into the attack in the 14th over, Pakistan were cruising comfortably toward the target with Shan Masood and Shadab Khan on strike.

He started his spell by breaking the partnership between Khan and Masood. Raza dismissed Khan in the 14th over for 17 off 14 balls and then removed Haider Ali in the same over for a duck. Raza then came back to remove Masood for 44 off 38 balls in the 16th over, bringing Zimbabwe back into the game. Zimbabwe then picked two more wickets in the final over to win the game by 1 run.

Earlier in the game, Zimbabwe scored 130/8 in 20 overs after winning the toss and electing to bat first. Sean Williams top-scored for the Chevrons with his 31 off 28 balls. Craig Ervine and Brad Evans also contributed with 19 runs each. Pakistan's bowling attack was on point in the game as they bowled superbly to restrict Zimbabwe to a low score. Mohammad Wasim and Haris Rauf in particular were absolutely phenomenal as they picked five wickets between them.

Meanwhile, the Zimbabwean fast bowlers also bowled brilliantly in the game to restrict Pakistan to 3-36 in the first eight overs. Blessing Muzarabani, Brad Evans, and Richard Ngarava all bowled well to put Pakistan under immense pressure in their chase of 131 runs. Raza was named the player of the match for his bowling figure of 3/25 in 4 overs.