Japanese tennis star and 2019 Australian Open winner Naomi Osaka believes she's the wrong person to ask for dating advice after being rejected by a man once.

The coronavirus pandemic has forced many sporting stars across the globe into self-isolation after all major events across the globe were cancelled. The stars have used the opportunity to interact and engage with their fans. Japanese tennis star Naomi Osaka also jumped on the bandwagon and engaged in a Q&A session with her fans on Instagram.

Naomi Osaka ranking: Naomi Osaka believes she's not the one to ask for dating advice

Naomi Osaka on Thursday interacted with her followers on Instagram through a Q&A session. One fan asked her for dating advice and asked what she would do when she had a crush on someone. The Japanese star suggested going for it and nothing will happen by remaining stagnant. However, Naomi Osaka added that she once got rejected by a man using this approach and she believes she is not the one to ask for dating advice. 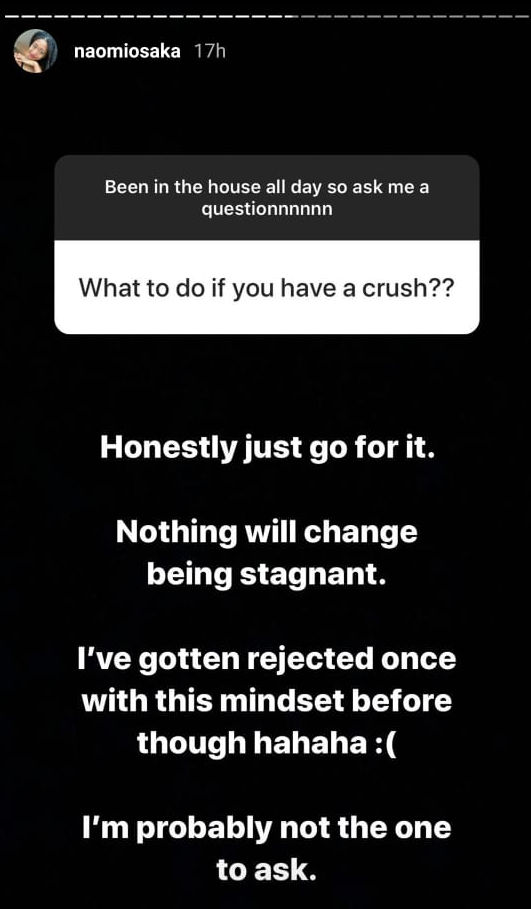 Naomi Osaka's Australian Open triumph in 2019 boosted her net worth. The Naomi Osaka net worth figure currently stands at $29 million. The 22-year-old is known to endorse brands such as Yonex, Nike, Nissan Motors, Mastercard, and ANA. She is currently ranked at No.10 in the WTA rankings, just behind her idol Serena Williams.

Naomi Osaka expressed her displeasure on Twitter after the French Open was postponed to September in the wake of the coronavirus outbreak. The tennis star was one of the many players who reacted furiously to the French Tennis Federation's decision to postpone the event without consulting the players. Traditionally played in May, the Roland Garros is the season's second Grand Slam, but now will be 2020's final Grand Slam after it was postponed to September 20, one week after the US Open.