Activists in Greece unfurled Tibetan flags and a banner at the flame-lighting ceremony for the 2022 Beijing Winter Olympics. They were later arrested. 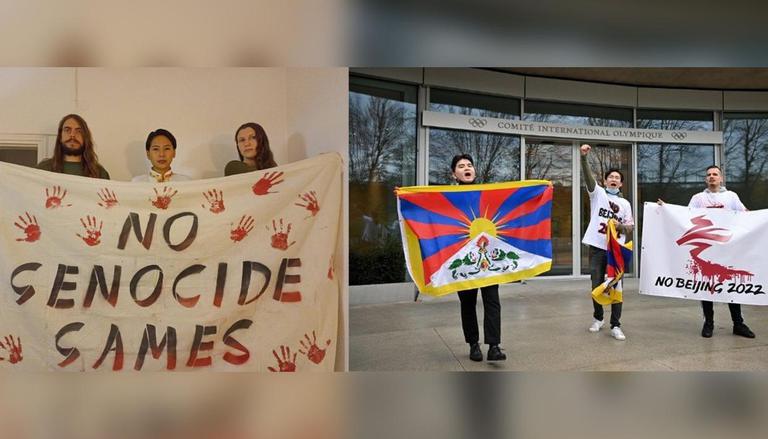 
On Monday, October 18, activists in Greece unfurled Tibetan flags and a banner at the flame-lighting ceremony for the 2022 Beijing Winter Olympics. The banner read, "No Genocide Games." The activists raised flags and a banner during an event in Olympia which was attended by International Olympic Committee (IOC) President Thomas Bach and many other dignitaries, including Chinese officials, according to a report by the Bangkok Post. Later, Greek police compelled activists to take down the flag and banner before apprehending them.

The incident occurred a day after three Tibet activists staged a protest at the Acropolis in Athens calling for a boycott of next year's Olympics. These events underline the challenges China will be facing which is set to host the Olympics since the Beijing Summer Games in 2008, reported Thailand's daily. Tibet has alternated between independence and Chinese domination over the centuries, with China claiming to have "peacefully liberated" the island in 1951. However, many exiled Tibetans accuse the Chinese government of religious repression, torture, and cultural erosion.

The demonstrating activists were identified as Chemi Lhamo, Jason Leith and Fern MacDougal, according to a spokesperson for the London-based Free Tibet organisation. Ahead of the ceremony, Leith stated that the International Olympic Committee has continuously prioritised profit over Olympic ideals, so now it is up to nations across the world to take action and withdraw their teams from the 2022 Beijing Winter Olympics. Tibetan demonstrations around the 2008 Beijing Olympics resulted in a crackdown, making Tibet the least free country on the planet, he said, as reported by the Bangkok Post citing Free Tibet.

Leith further went on to say that the Chinese government's response to recent UK sanctions demonstrates that it is sensitive to symbolic gestures that undermine its attempts to paint a rosy picture of life under its rule. A complete boycott of these Games would send a strong statement that the world would no longer stand with China while it continues to oppress people, he added. It should be mentioned here that the Olympic flame was ignited in the ruins of the old Temple of Hera, the cradle of the Ancient Games. Following all COVID-19 protocols, the ceremony was held in the presence of IOC members, the Greek and Chinese Olympic committees, Greek President Katerina Sakellaropoulou, and the media, reported the Bangkok Post.