Bizarre Jeans With A Giant Pocket To Hold All Essentials - Hit Or Miss?

Bizarre jeans with giant pocket is totally defying the ancestral concept of coin pockets on the denim as the man stuffs several large objects in it.

A man has crafted a pair of jeans with a pocket so huge that it can essentially accommodate all the essentials. The bizarre pants were created by the man that goes by the username rightcoastguy on reddit who claimed that he designed the unique product ideas for "fun". Internet suggested that the man was running several years late on product ideas as the 1994 Jim Carrey starrer film The Mask pulled the similar concept years ago.

In a picture posted by him on the reddit, he can be seen flaunting a light blue pair of jeans with a pocket totally defying the ancestral concept of coin pockets on the denims. Several large objects like ipad, surge cans, magazines, a hammer, hair brush, spectacles, powerbank, and an apple laptop could be seen stuffed in the back pocket of the jeans. 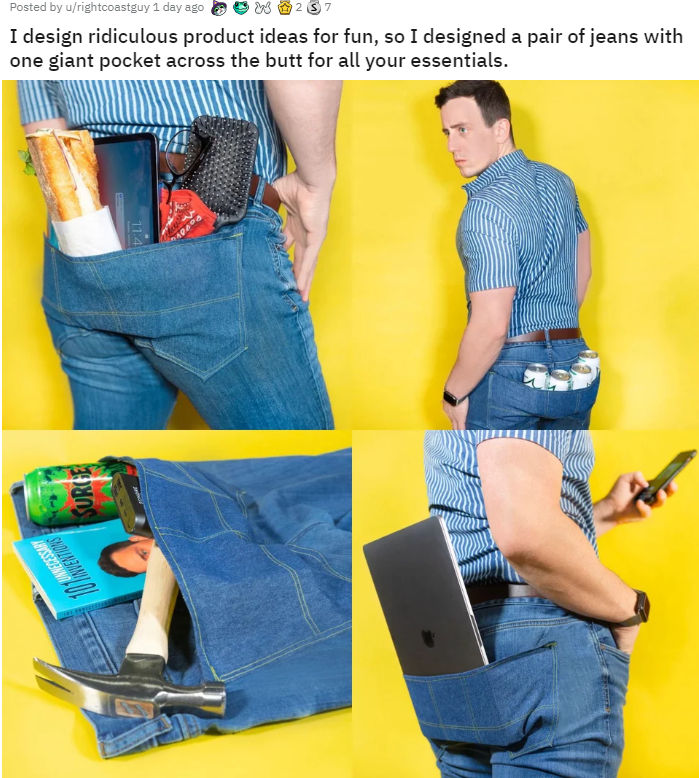 The concept left the reddit community aghast as they poked hilarious comments on the man’s creative product. Not just that, the picture has been widely circulated with 89 per cent upvotes and 2.1k comments. A whopping 99,000 users reacted to the picture which essentially is a collage of four with different objects tucked in each.

In a witty response, a user suggested that the man must cut two holes in the wide pocket so an infant can sit in it and face backwards. Another user retorted, negative points for sitting on the infant. A user wrote that in Great Britain, that pocket would be across the front, while another asked what the man was going to do with all that junk in his trunk.

In what can be called a witty advise, an individual said that the radical pocket concept needs execution in women’s jeans, it was a great idea that the designers had yet to latch on. Here are some of the mixed reactions.

Read This Coconut Game In Philippines Is The Funniest Thing On Internet Today, Watch Video