A Labrador Rescue has put up an ad on Facebook page for a blind dog Dumpling in Australia, appealed to people to find her a cozy home in an emotional post.

A blind 10 years old Labrador ‘Dumpling’ is reportedly looking for a home after being abandoned at Gold Coast pound in Queensland, Australia. She was reportedly left on the streets after she has given birth to puppies.

A Labrador Rescue has put up an ad on their Facebook page to appeal to people to find her a cozy home in an emotional post. The post spoke in a dog personified language, where Dumpling is imploring the humans that she noticeably has no eyes and that caused her a lot of pain. 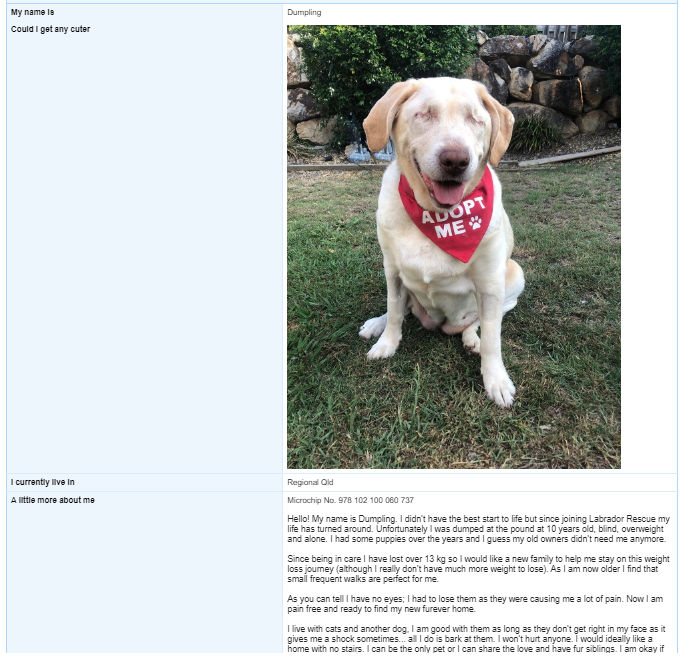 The post further explained, that the dog was overweight when she was taken in but has lost about 13 kg of weight and wants a loving family to hop on along her journey. The post also highlights the struggles of a visually challenged dog as Dumpling clarifies that despite being a friendly dog when she approaches other pets, they almost freak out.

The Registered Charity has reportedly described the dog’s traits as ‘extremely sweet, charming and good-natured' on Facebook. They told the media that a loving home for Dumpling that could accommodate her needs keeping in mind that the dog suffers from visual impairment.

Beth was born with a severe facial disfigurement

Lab Rescue released pictures of the dog earlier on social media, and according to them, the ‘gorgeous girl’ can be taken home for $300. The rescue had also mentioned that Dumpling is desexed, vaccinated, microchipped and heartworm tested. A few weeks ago, a pup born with a face defect named Beth was reportedly looking to find a caring home. The eight-month-old Labrador was born with a severe facial disfigurement so worse that her entire snout dropped on the left-hand side exposing teeth, as per reports.

Bethany was put under medical assistance and was cleared by a veterinary doctor in Romania after she was reportedly healthy and could consume food. Bethany was then brought in Rescue for Dogs and the charity's employees are looking for a home for the Labrador mix.

Read Dog Honks Impatiently After Owner Leaves Him In Car, Netizens All Hearts