Tesla maker Elon Musk in an audio talk with private social app Clubhouse, said that he hopes to create a hyper force of monkey gamers that can play video games. 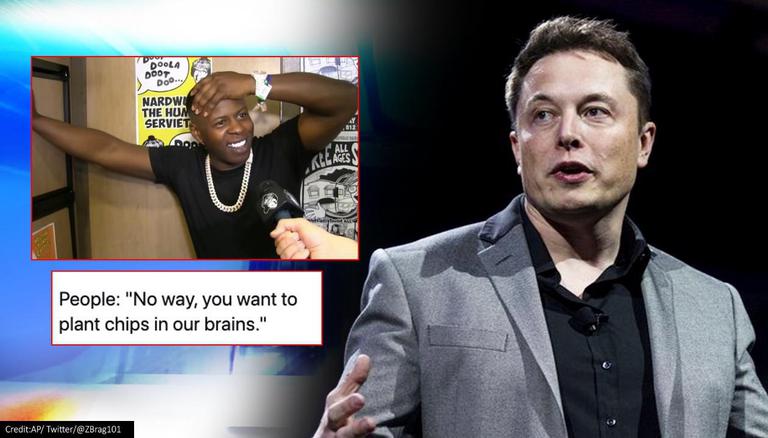 SpaceX CEO Elon Musk’s redefining of the mind’s AI advancement by wiring a monkey’s brain has triggered memes on the internet after users analyzed the labyrinth of the ‘Cyborg’ creature on human civilization. Tesla maker, in an audio talk with private social app Clubhouse, said that he hopes to create a hyper force of monkey gamers that can play video games via brain chip, stating, that his Neuralink startup has already done an implant that he expects to launch before the world. The tech billionaire asserted that his monkey “looks totally happy” and the Neuralink facility, in fact, met all US regulatory requirements. This, however, did not go down well with netizens that are now hurling dark humour across the web post-Tesla CEO’s Q&A session.

Read: Elon Musk Claims He Has 'a Monkey With Brain Implant To Play Video Games'

“We’ve already got like a monkey with a wireless implant in their skull and the tiny wires, who can play video games using his mind. And he looks totally happy. He does not look like an unhappy monkey," Musk said in a live-streamed audio chat with Clubhouse that he shared on his Twitter handle. He added, “You can’t even see where the neural implant was put in. He’s not uncomfortable and he doesn’t look weird”, adding that Neuralink “went the extra mile for the monkeys,” and the lab has some of the “the nicest monkeys humanity has ever seen.” In a twisted statement, the SpaceX boss explained, “One of the things we’re trying to figure out [is] can we have the monkeys playing mind Pong with each other? That would be pretty cool.”

Internet, post his audio chat, jumped in the comments thread of the updates, speculating the aftermath of Musk’s convoluted explanation of his brain-brain-monkey interface invention. “Wow! Pulling this while in a pandemic. How many sci-fi movies we gonna be in at once?” One said. “Worst horror documentary you'll ever see,” another added. “Wait, so who is he taking to Mars us or the monkeys,” another speculated. “Reminds me of the movie demolition man where Sylvester Stallone & Sandra bullock played mind ‘ping pong’,” one other said. Several on the internet were alarmed giving ‘Planet of Apes’ reference, as one noted, “If this [experiment] goes bad we got a real-life gorilla Grodd.”

Seen enough movies to know where this is going pic.twitter.com/Tp9neJFgZw

Government: "get the vaccine so we can end the pandemic quickly."

People: "No way, you want to plant chips in our brains."

Elon Musk: "I literally want to plant chips in your brains."

What a surprise, I watched 3 movies today on The Planet of The Apes.

Wait, does that mean ads on mobile games will pop up in my head pic.twitter.com/Hxe9qRo1L0

Read: Elon Musk Says This Tesla Model Can Reach '0 To 60mph In Less Than 2 Seconds'