According to the European Space Agency (ESA), the lockdown has played a huge role in bringing down pollution levels in the continent by about 50%.

The coronavirus lockdown has pushed more than half of the world's population into the confinements of their homes, shutting down almost all public and private transports, schools, factories and major businesses. Despite the negative social and economic impact that the COVID-19 pandemic is predicted to bring later, the lockdown has brought some great news for environmentalists. According to the European Space Agency (ESA), the lockdown has played a huge role in bringing down pollution levels in the continent by about 50%.

According to data from the Copernicus Sentinel-5P satellite, from the European Union Copernicus programme, the lockdown has brought pollution levels in some European cities down by 45-50% compared to the same period last year.

Scientists from the Royal Netherlands Meteorological Institute (KNMI) have been monitoring air pollution in Europe for the past few months using data from the Tropomi instrument from the Copernicus Sentinel-5P satellite. The data shows low levels of nitrogen dioxide concentrations across Europe, compared to the March-April averaged concentrations from 2019.

The space agency shared two images comparing the levels of nitrogen dioxide concentrations in Europe. One image is from last year, while the other one is from March-April this year.

Nitrogen dioxide is produced from power plants, vehicles and other industrial facilities and can have significant impacts on human health, in some cases leading to respiratory problems. The lockdown forced those high polluting facilities to shut down which in return decreased the pollution levels across the region. 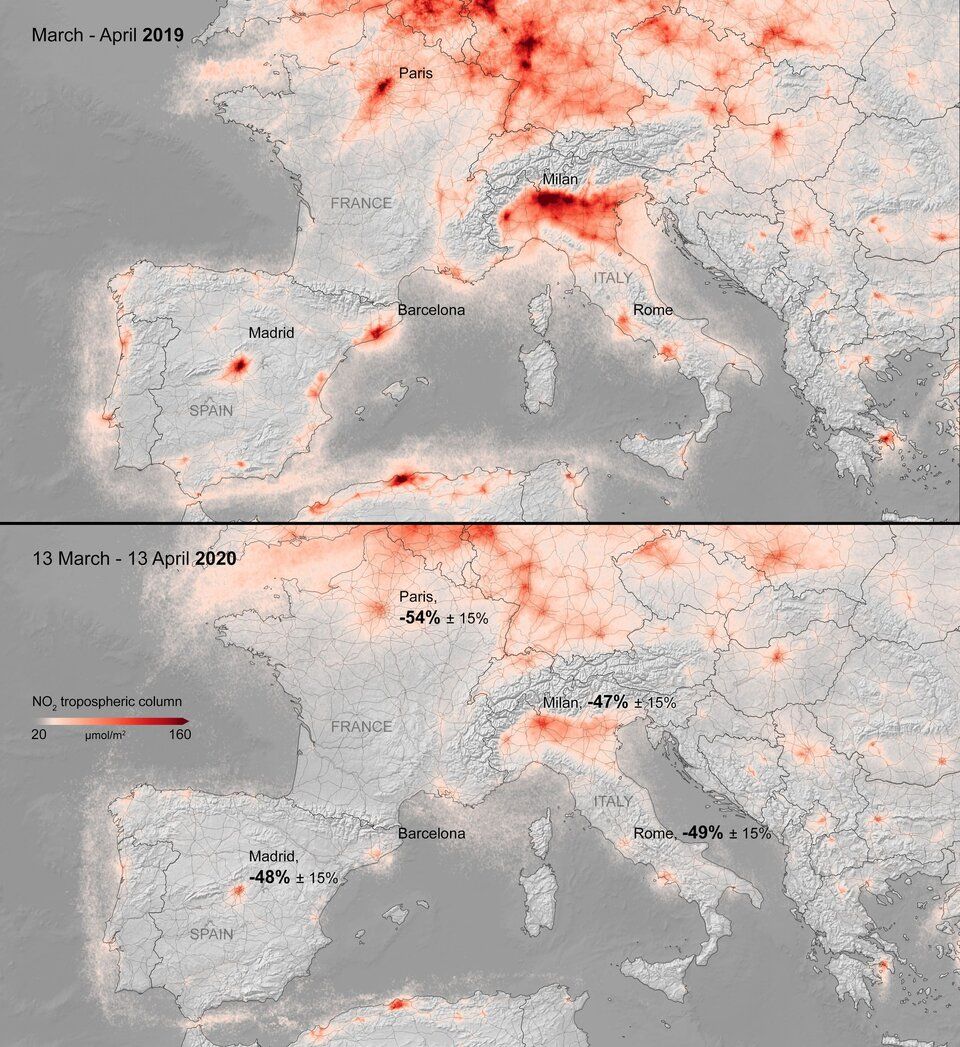 The coronavirus pandemic has infected over 2.1 million people globally and has killed nearly 1,37,000 patients since it first broke out in December 2019. The virus is believed to have originated from a seafood market in Chinese city of Wuhan, the initial epicentre of the disease, where animals were reportedly being traded illegally. Currently, the United States, Italy, Spain, France and the United Kingdom are the most affected countries in the world with a recorded death toll of more than 10,000.

Read: US Judge Requests Lawyers To Dress Appropriately For Hearings On Zoom App