German Interior Minister Horst Seehofer on April 30 banned Hezbollah, an Islamist militant group based out of Lebanon, from operating in the country.

German Interior Minister Horst Seehofer on April 30 banned Hezbollah, an Islamist political party and militant group based out of Lebanon, from operating in the country, said a ministry spokesperson on Twitter. Steve Alter took to his Twitter handle to announce the development where he said that Seehofer has prohibited the operation of the Shiite terrorist organization Hezbollah (Party of God) in Germany today and police measures have been taking place in several federal states. Germany had earlier banned Hezbollah-linked fundraising organisation they say had raised millions of dollars for the militant group.

Steve Alter in his Tweet added that rule of law can also act at the time of crisis, pointing out at the ongoing raids being conducted on four associations linked to the Islamist group amid coronavirus lockdown. According to reports, law enforcement agencies are conducting raids on four mosque associations in Berlin, Dortmund, Bremen, and Münster allegedly linked to Hezbollah. Germany has declared the Lebanon-based group a terrorist organisation. The group is already considered a terrorist organisation by countries such as the United States, Canada, Israel, the United Kingdom, the Netherlands, Australia, Colombia, Venezuela, the Arab League, among others. 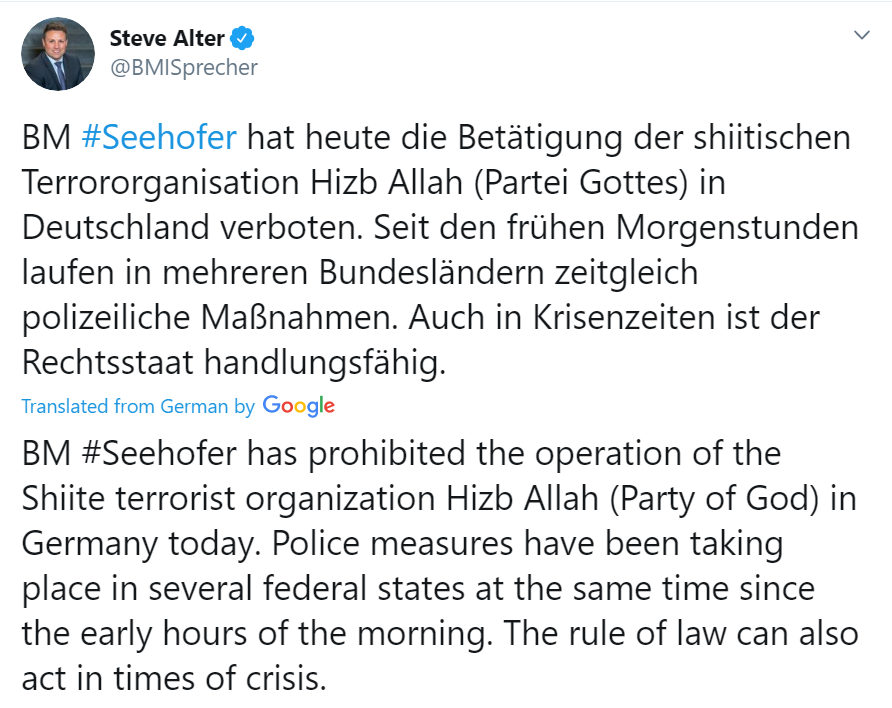 It is alleged that Hezbollah works as a proxy for Iran in the ongoing Iran–Israel proxy conflict. The group was founded in 1985 and its leaders were followers of Ayatollah Khomeini, the first Supreme Leader of the Islamic Republic of Iran. If media reports are to be believed, the group's forces were trained by the Revolutionary Guards of Iran, who arrived in the country via Syria. Hezbollah credited in its country for driving out the Israeli forces from the south in early 2000. To bring into perspective the influence that Hezbollah has in its home country would be the simple fact that its paramilitary wing is considered more powerful than the Lebanese Army.