A South African wedding venue with Christian owners declined to host the marriage ceremony of a same-sex couple leaving the newly-engaged 'overwhelmed with anger'. Megan Watling and Shasha-Lee Heekes contacted the owners of Beloftebos, which is reportedly a popular event place in Cape Town and inquired about the potential dates for their wedding. However, they later received an email saying that the venue does not want to accommodate weddings between couples of the same gender. Watling took on Facebook to post the screenshot of the response and explained how it made her 'cry'.

Watling wrote on Facebook, "At first I cried, but then I was overwhelmed with anger. How, in 2020, is this still a reality? Same-sex marriage has been legal in South Africa since 2006.."

Since Watling narrated the incident on Facebook, the post not only went viral on the internet but also left netizens outraged. The post has received nearly a thousand comments and five thousand shares supporting the LGBTQ community. One of the internet users also called the wedding venue owners as 'homophobic', while someone else also narrated a similar experience of her own where priests refused their marriage.Some internet users also called it 'disgusting' that in such a day and age some people can be so 'narrow-minded'.

However, their were a section of the people who sided with the venue for having their 'own beliefs'. One of the Facebook user not only slammed the lesbian couple for making the issue public instead of dealing with it in private 'for fame' but also told them to 'get over with it'. The post also fueled discussions among people who supported Watling and Heekes with the people who believe it was right for the venue to deny a lesbian wedding.

The Facebook user wrote, “We had the same issue, we had priests put the phone down on us multiple times, I then came across a church that supports gay marriages in Waterkloof which is where we got married.. if you would like some help, let me know..”

Another user wrote, "I just wonder seen that they believe in their believes....... Do they refuse to do weddings for people that have been divorced as well seen that that is part of the 10 sins? Being gay is not even part of the 10 sins. And I still want someone to show me where in the Bible does it say a woman vs woman is wrong as it only states a man vs a man is a sin".

Facebook user sided with the wedding venue and wrote on Facebook, " Everyone has a right to their own beliefs. You want to force yours on the venue. They have the right to practice their belief..or am I missing something. Just get a venue that allows for LGBTQ.. can't be that difficult" 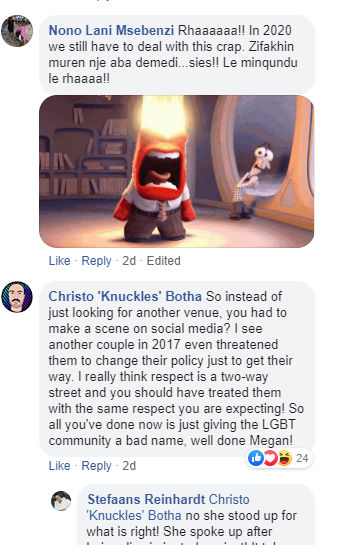