Video was recorded by the infant's mother Emma Ayerswhere in which he can be seen rubbing spaghetti on his belly and happily playing as the mother giggles.

Albie Dunville, a 12-year-old baby with Down Syndrome has become an online favourite after a video went viral where he can be seen rubbing spaghetti on his belly. In the clip, which was recorded by his mother Emma Ayers, the baby can be seen giggling as he is happily occupied playing.

The clip has gone viral making everyone laugh at Albie’s innocence. Emma shared his video with the charity named 'Positive About Down Syndrome' which had reportedly supported the family after baby Albie was diagnosed with Down syndrome.

Positive About Down Syndrome

The charity posted the video on Facebook saying that it was Saturday night treat in the shape of one-year-old Albie who can be seen enjoying his dinner in the video. It further said that the organization, Positive About Down Syndrome provided support to new and expectant parents if the baby is diagnosed with the Down Syndrome condition.

Emma was feeding her son dinner

Albie's mother, Emma Ayers told the media that she was feeding her son dinner when he decided to paste some on his tummy. Albie’s father Adam Dunville can be heard laughing at the child’s playfulness saying, "Oh my God, what have you let him do there?" To which, his mother Emma replies that it was too late to stop the baby as Albie continues to laugh and grin at the camera.

The social media users flooded the video saying that the infant was too cute to handle. A user wrote, “What a wee cutie Albie is, and a lovely smile, too. There's a certain logic to him - the food ends up in the tummy so let's bypass the eating bit.”

Another user wrote, “When there is so much wrong in the world, everyone needs an Albie to put a smile on their face. Albie, we love you.” 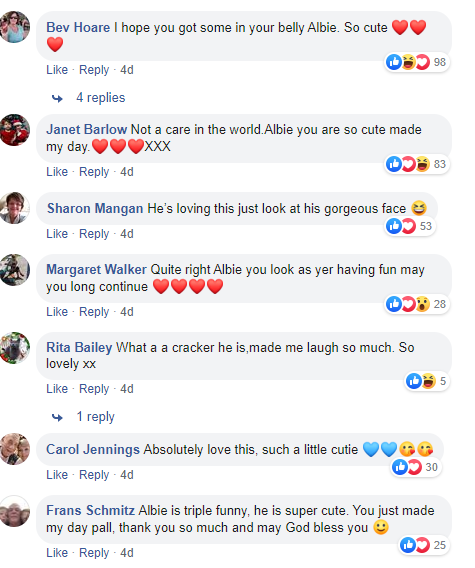