The years-long feud sparked in 2018 after Meghan Markle's dad had collaborated with a tabloid to arrange a photo shoot, which had upset the Duchess of Sussex. 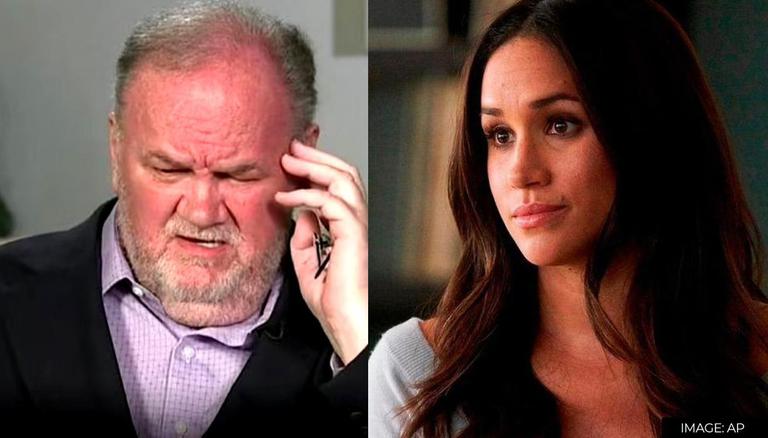 
The Duchess of Sussex Meghan Markle’s estranged father Thomas Markle on Tuesday took centre stage once again criticising his daughter and son-in-law Prince Harry on a national TV show 'Good Morning Britain’ as the 77-year-old said that the duo always hankered after wealth. In a statement that aired Tuesday, the father of Meghan Markle made controversial claims, saying that his daughter had "pretty much disowned both sides of her family”. The latter then asked the couple to end the years-long feud that had sparked in 2018 after he had collaborated with a tabloid to arrange a photo shoot, which had upset Meghan. The Duchess of Sussex, in a letter, had ended the relationship with her father, stating that her dad’s behaviour was a “plain and serious invasion” of her privacy.

In his recent interview that aired live on October 21, Thomas said, "We should grow up, talk, make up for the sake of the children right now and for ourselves. This is ridiculous, it's been going on for almost four years - it's crazy.” Furthermore, he added that it was "ridiculous" that his daughter and he had been estranged for several years, as he called for her to mend the relationship. Thomas told the British television network that he had not met with his grandchildren Archie, two, and Lilibet because his daughter refuses to speak with him.

'Once she hooked up with Harry, she changed': Thomas Markle

"You're asking me a question that is four years old, and I can't answer it. I don't know what changed her. She'd never been that way before and once she hooked up with Harry, she changed," Thomas said, as per his televised statement at the show that aired Tuesday. He added, that his relationship with his daughter soured more after she found out that he “was giving too much attention to her half-brother and half-sister”. He alleged that Meghan had urged him to "stop talking to them and I couldn’t.” He revealed that he was, in fact, "ghosted" by Meghan, adding that the couple did not even allow him to meet with his grandchildren.

In one of the many such controversial remarks made earlier against his daughter, Thomas had labelled his daughter as a “controlling" person, he, however, was quick to add that she was never rude though. “The ghosting I don't completely understand. But to my knowledge, as I said, she's always been in charge," E! Online had earlier quoted Thomas as saying about Meghan Markle.