US Police Raise False Alarm, Link Coronavirus To Meth To Trick Users Into Turning In Drugs

An American police department raised a false alarm on social media about a possibility of meth being contaminated with the novel Coronavirus to trick users.

Merrill police department on Thursday raised a false alarm on social media about a possibility of meth being contaminated with the novel Coronavirus in an attempt to trick drug users into turning in their substance. Merrill police department on February 27 posted a message on Facebook where it urged people to bring the illegal drug to the police station where they will test it for free. Later, in an updated post, the police department admitted that the claim of meth being contaminated with Coronavirus was false, and it was done in an attempt to trick people into turning in their meth to the station.

False claim by US police

Merril police department had earlier made a post asking people to take meth possessed by them to "the Merrill Police Department and we will test it for free". It also said that if people are "not comfortable going into an office setting, please request any officer and they'll test your Meth in the privacy of your home". After facing a backlash, the department on February 28 updated the post admitting it was trying to trick people into bringing their drugs to the station. 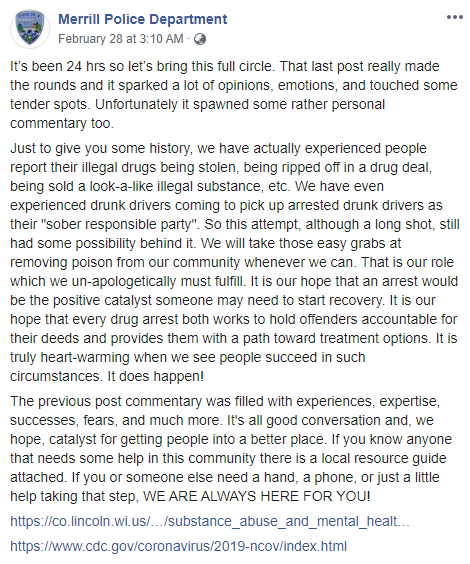 The new Coronavirus, also known as COVID-19, has claimed more than 2,900 lives across the globe and has infected over 85,000 people since December 2019. According to reports, at least 106 people have died outside mainland China, which makes it the worst disease outbreak in the 21st century. The United States on Saturday reported its first death due to the virus from Washington state. The virus originated from a seafood market in Wuhan city, where animals were being traded illegally. Hubei province in China has been most affected by the contagious disease, which is also the epicentre of the virus.