White House Physician Dr Sean P Conley on Saturday said President Donald Trump’s COVID-19 PCR sample reveals that he is no longer a transmission risk to others. The President’s advanced diagnostic test shows that "there is no longer evidence of actively replicating virus" in his body, he added. However, the report did not mention when Trump’s last negative test was.

In a public memo released earlier by White House press secretary Kayleigh McEnany, Dr Conley said, “I am happy to report that in addition to the President meeting CDC criteria for safe isolation, his PCR samples reveal that he is no longer considered a transmission to others. Moreover, there is no longer evidence of actively replicating virus.” 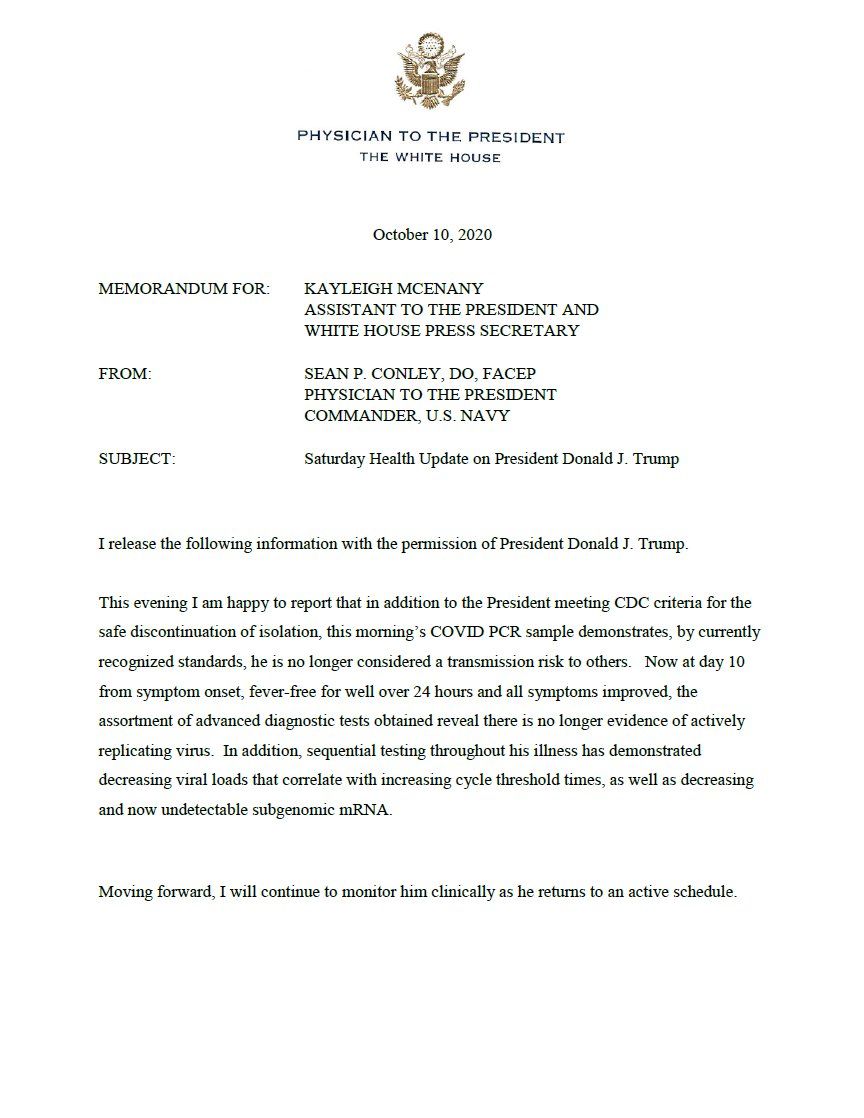 As the President completed 10 days of COVID-19 therapy on Saturday, doctors said Trump is fit to resume public engagements. Soon after receiving the green signal from his physician, Donald Trump hosted his first public event at the White House on October 10. On Friday, Trump said that he feels "very strong" and has not been taking any medication as of earlier in the day.

The White House said Trump's hospitalization at Walter Reed National Military Medical Center, which began October 2, was precautionary and his symptoms were mild. Trump credited his recovery to an experimental antibody drug made by Regeneron Pharmaceuticals Inc.

Health experts say it’s not a cure, but experimental antibody drugs like those are among the most promising therapies being tested. They aim to help the immune system fight the coronavirus. However, they are still in the testing phase and their safety and effectiveness are not yet known.

READ | Trump Says He's No Longer On Medication For Virus

United States President Donald Trump and First Lady Melania Trump tested positive for the COVID-19 last week after one of the president's close aides got infected with the virus. This situation came with barely a month to go for the US Presidential Election which is due to take place on November 3.

Taking to Twitter, Trump had said that he will begin his quarantine and recovery process immediately with his wife. "We will get through this TOGETHER!" Trump had said. On the second day of his testing positive, Trump was flown to Walter Reed Military Hospital. The US President returned to White House after three days of hospital stay and has started resuming his campaign work.