Meghan Markle in her first-ever primetime interview with her husband told Winfrey that the jewellery carried a special symbolism and was of a sentimental value.

The Duchess of Sussex, Meghan Markle, was seen wearing a diamond bracelet belonging to the late Princess of Wales Diana, as she appeared for an interview with Oprah Winfrey. The interview is scheduled to air on Sunday, March 7 at 8 P.M. Eastern on CBS. Seated alongside her husband, Duke of Sussex Prince Harry, Markle in her first-ever primetime interview with her husband told Winfrey that the jewellery carried a special symbolism and was of a sentimental value to her as it belonged to Prince Harry's mother, Princess Diana. Furthermore, the Duchess of Sussex revealed that the bracelet that she wore in the interview is the same that the couple selected the stones from in order to create Meghan's engagement ring.

The aquamarine diamonds from Diana’s bracelet donned Meghan’s ring during her wedding day in 2018. The 39-year-old’s wedding ring also featured another large stone from the country of Botswana, 'a country extremely dear' to Harry.  At the reception later, organised at Frogmore House, the Duchess of Sussex wore one of Diana's bracelets and a pair of butterfly studs and told Winfrey that by wearing her jewellery she made clear to Harry that her own feelings for his mother remain just as strong. Furthermore, she added that the bracelet helped her keep Princess Diana‘s memory alive when all eyes were fixed on her during a television interview. 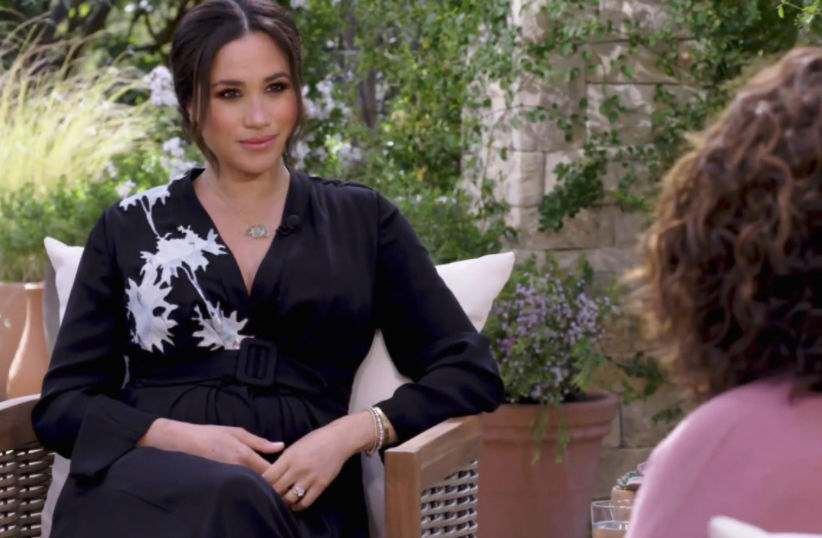 Prince Harry, similarly mentioned his mother saying that he exited the royal duties with his wife Meghan because “history was repeating itself”. In Oprah Winfrey’s upcoming interview, Prince Harry said that he was “relieved” to have his wife Meghan Markle by his side and referred to his mother’s departure from the Royal family three decades ago. “I can’t imagine what it must have been like for her [Diana], going through this process by herself all those years ago. It’s been unbelievably tough for the two of us, but at least we had each other,” the Duke said.

Read: James Corden Boasts Of Being A Part Of BTS' ARMY In Front Of Prince Harry, Fans Laud Him