Secretary of State Mike Pompeo on January 7 condemned the siege of the US Capitol building by the pro-MAGA supporters and strongly reacted to ex-US President George W Bush’s remarks likening the ‘insurrection’ to a “banana republic”. Taking to his official Twitter handle, the US secretary of state wrote, that the slander ‘Banana Republic’ reveals a faulty understanding of democracy in America. “In a banana republic, mob violence determines the exercise of power. In the United States, law enforcement officials quash mob violence so that the people’s representatives can exercise power in accordance with the rule of law and constitutional government,” Pompeo responded. Furthermore, Pompeo said, “America is better than what we saw today at a place where I served as a member of Congress and saw firsthand democracy at its best.” 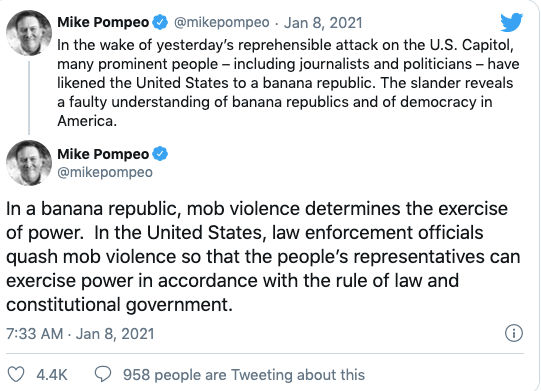 The top US diplomat was responding to former president George W. Bush and other top congressional Republicans’ remarks about the mob’s Capitol building invasion. Describing the storming at the Congress chamber as “sickening" and “heartbreaking”, Bush said in a statement, ”I am appalled by the reckless behaviour of some political leaders since the election and by the lack of respect shown today for our institutions, our traditions, and our law enforcement.” He added, “This is how election results are disputed in a banana republic — not our democratic republic”, as he condemned the incitement of violence. He warned that the Insurrection could do grave damage to a nation and its reputation, adding that it was the responsibility of every American citizen to support the rule of law.

Read: Maduro On The Storming Of US Capitol By Mob

The storming of the U.S. Capitol today is unacceptable. Lawlessness and rioting -- here or around the world -- is always unacceptable. I have travelled to many countries and always support the right of every human being to protest peacefully for their beliefs and their causes.

Statement by President George W. Bush on Insurrection at the Capitol pic.twitter.com/rF77j0fIBK

US congressmen use similar analogy

Similarly, reiterating Bush’s criticism, Former Rep. Trey Gowdy, R-S.C., told Fox News' "The Story" that if anyone was thinking about moving to a narcos state or banana republic, Wednesday's attack was “a good example of what it would look like”. In his live address, he added, ‘That is not America’. Daughter of former Vice President Dick Cheney and Representative Mike Gallagher, a Republican who supported Trump, described the upheaval using the similar analogy. “We are witnessing absolute banana republic c—p in the United States Capitol right now. @realDonaldTrump, you need to call this off,” Gallagher tweeted.

Chaos and violence had ensued in the US Capitol as hundreds of pro-Trump rioters frenzied around the building, pounding doors, and destroying property to disrupt the certification of Joe Biden. Officers drew guns as the mob invaded and attempted to break into the House chamber. A woman was fatally shot by US Capitol Police and three others succumbed to medical injuries.