Ahead of the final vote on his impeachment trial, United States of America's 45th President - Donald Trump spent the weekend at his Florida resort - Mar-a-Lago

Ahead of the final vote on his impeachment trial, United States of America's 45th President - Donald Trump spent the weekend at his Florida resort - Mar-a-Lago - celebrating the Super Bowl LIV. Welcoming the homecoming President, his resort hosted a party depicting Trump as 'Footballer'. The photo - which has gone viral on Twitter shows a large cartoon of Trump's face superimposed on a red T-shirt - clad footballer, smirking down at the audience.

Getting a little exercise this morning! pic.twitter.com/fyAAcbhbgk

Trump says 'US has the best experts' amid coronavirus dread

Apart from the 'Football' poster, the event was named "Red White & Blue: Celebrating Trump Kick-Off 2020 Victory - hosted by the pro-Trump group 'Trumpettes'. Visuals show Singer Lee Greenwood - best known for his song "Proud to Be An American" performing to the crowd, while cheerleaders clad in white T-shirts and pants bearing the American flag's print singing in the background. Reports stated that Trump attended the event after golfing and was cheered on by the Florida Atlantic University marching band. 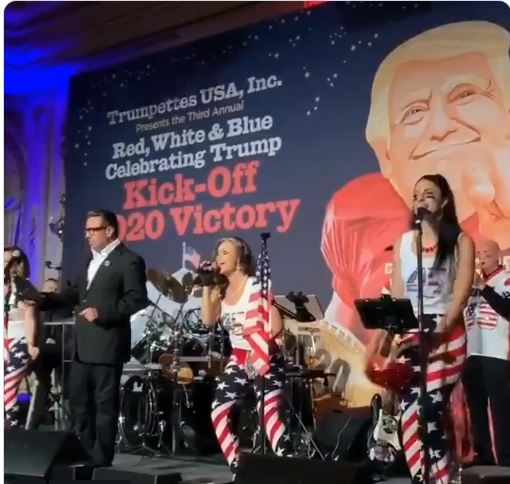 On Friday, reports stated that the US Senate voted 51-49 against presenting any witnesses for Trump's impeachment trial, who were blocked from testifying in the Congress against Trump. The US Congress - which is controlled by the Democratic party, impeached Donald Trump on December 18, 2019, on both charges - abuse of power and obstruction of Congress. The Senate - controlled by the Republicans, will acquit Trump on Monday - the day when Iowa caucuses go to vote.

Democratic race opens in Iowa amid worry over beating Trump

Why was Trump impeached?

In a formal House inquiry, it was found that Trump had solicited a foreign power - Ukraine's - help in his 2020 re-election bid. A White House whistleblower had submitted a report stating that Trump had withheld military aid to Ukraine unless Ukrainian President Volodymyr Zelensky made a public announcement of a probe into former Vice-president Joe Biden. Previously, an FBI probe had confirmed Russian interference into the 2016 US elections but had not judged if Trump was guilty or not.